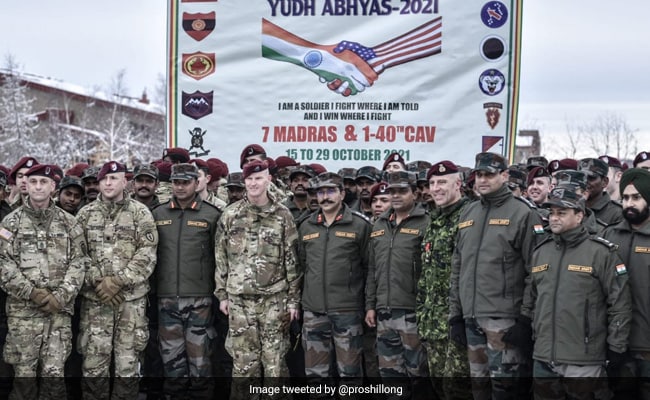 The Indo-US joint training exercise concluded at Elmendorf Richardson joint base in Alaska.

A 14-day joint training exercise between the armies of India and the US has concluded at Elmendorf Richardson joint base in Alaska, the Defence Ministry said on Saturday.

A total of 300 US Army soldiers belonging to First Squadron (Airborne) of the 40th Cavalry Regiment and 350 soldiers of the 7 Madras Infantry Battalion Group of Indian Army participated in the exercise that ended on Friday, the ministry said in a statement.

“The aim of this 14-day exercise was to familiarise each other with operational procedures, combat drills and developing inter-operability,” it said.

The exercise was conducted in two phases. The first phase comprised combat conditioning and tactical training by both the contingents.

The troops were organised into composite companies with mixed platoons of Indian and US armies and the validation exercise culminated in a raid on an enemy position in mountainous terrain and securing of critical infrastructure, it said.

The Indo-US defence ties have been on an upswing in the last few years. In June 2016, the US had designated India a ‘Major Defence Partner’.

The two countries have also signed key defence and security pacts over the past few years, including the Logistics Exchange Memorandum of Agreement (LEMOA) in 2016 that allows their militaries to use each other’s bases for repair and replenishment of supplies as well as provides for deeper cooperation.

The two sides also signed COMCASA (Communications Compatibility and Security Agreement) in 2018 that provides for interoperability between the two militaries and provides for the sale of high-end technology from the US to India.

In October last year, India and the US sealed the BECA (Basic Exchange and Cooperation Agreement) agreement to further boost bilateral defence ties.

The pact provides for sharing of high-end military technology, logistics and geospatial maps between the two countries.