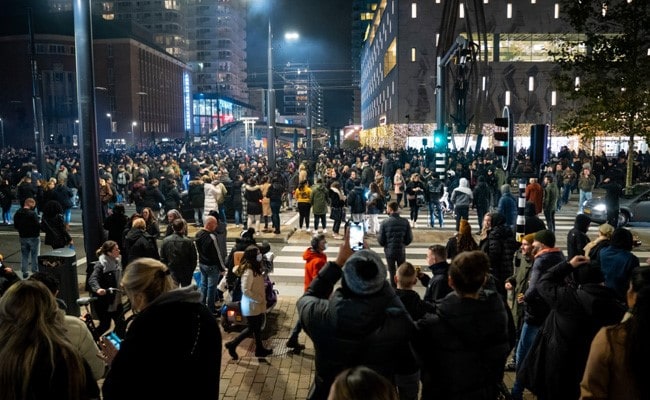 Dutch police said Sunday they have arrested 19 people over riots in The Hague after the country was rocked by a second night of violence over the government’s coronavirus measures.

Officers in riot gear charged hundreds of demonstrators who set fire to bicycles and an electric moped piled in the middle of a busy intersection on Saturday night. A water cannon put out the blaze.

“The police were also pelted with heavy fireworks and stones thrown from roofs,” the Hague police said in a statement.

“Officers made a total of 19 arrests for, among other things, insult.”

Riot police in one incident dragged a woman from a passing car after the occupants shouted at police, and put her into a police van, AFP correspondents witnessed.

Five police officers were injured during the unrest while a rock thrown by rioters smashed the window of a passing ambulance carrying a patient, police said.

Some of the rioters had links to football hooligans and “groups that often have ties to other forms of organised crime,” Justice and Security Minister Ferd Grapperhaus told public broadcaster NPO.

The Netherlands went back into Western Europe’s first partial lockdown of the winter last Saturday with at least three weeks of curbs, and is now planning to ban unvaccinated people from entering some venues, the so-called 2G option.

The country suffered its worst riots in decades in January after the government introduced a coronavirus curfew.