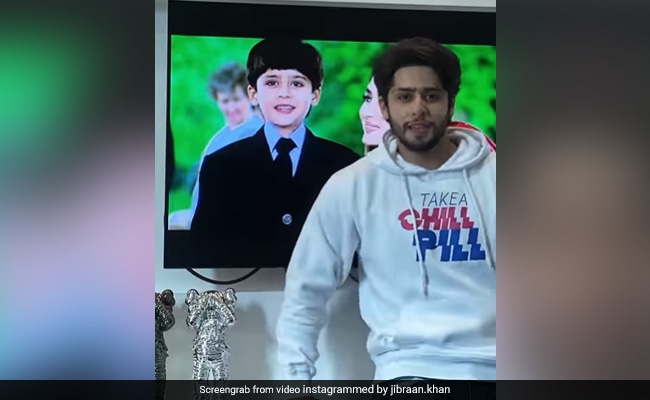 Jibraan Khan in a still from the video. (courtesy: jibraan.khan)

Karan Johar’s Kabhi Khushi Kabhie Gham has been trending big time on social media and why shouldn’t it? The film just clocked 20 years in 2021.Kabhi Khushi Kabhie Gham or K3G as it is popularly called by fans, resonates with today’s generation through its evergreen dialogues, songs and fashion. We get you, Poo. Anyway, so it is not just stars like Alia Bhatt, Ananya Panday and Sidharth Malhotra who made special reels for the film, actors and filmmakers associated to the project have also contributed to the plethora of reels accompanied with the hashtag #20yearsofk3g. Remember Krish? The kid who played Shah Rukh Khan and Kajol’s son in the film? He is all grown up and recreated his dialogue from the film. So did little Pooja, sorry, we mean, little Poo (played by Malvikaa Raaj).

When Krish sang the national anthem at his annual concert in London, it was a quite a moment in Kabhi Khushi Kabhie Gham. So Jibraan Khan, who played Krish, recreated the “Agar zindagi mein kuch haasil karna ho, kuch paana ho….toh” dialogue. He wrote in his caption: “This film is where I fell in love with the camera and thank you to Karan Johar and the entire cast and crew for letting this lil Krish have such a ‘chill pill’ time on set. #20YearsOfK3G.”

Check out the video here:

Who can do the tongue twister better than Pooja aka Malvika Raaj, who starred as a younger Kareena in the film. Malvika, sharing a reel, wrote: “Celebrating 20 years of K3G. An evergreen film, sharing the screen with the icons and being directed by a maestro Karan Johar… That was my introduction to the craft to which I have committed my life to. K3G has been a real honour for me.”

Student Of The Year 2 director Punit Malhotra also starred in the film. He had a cameo in the film and a thing “that still upsets” him. Sharing a then and now video, he wrote: “My first film, my first film as an AD. And only Karan Johar to thank for such fond memories. The only thing that still upsets me is that I got hit for a six.”

Ramona, who played Poo’s friend Sonia in K3G, instead of recreating her own lines took the liberty to try out other scenes from the film and let’s just say she did well. Recreating Hrithik’s college scene with Tarun Mansukhan, Ramona wrote: “I remember when Karan Johar would make me practice my lines in my Parsi Hindi accent, and bonk me on the head with the script every time I got them wrong! So played it safe here by stealing the eternally gorgeous Hrithik Roshan’s impossible line… Still – got schooled by my dearest friend and then assistant director Tarun Mansukhani. Had to add one of my iconic lines after to make up for it.” She also remembered the film’s producer Yash Johar and wrote: “Thinking of Yash uncle too as we celebrate 20 years of K3G.”

Take a look at the video here: