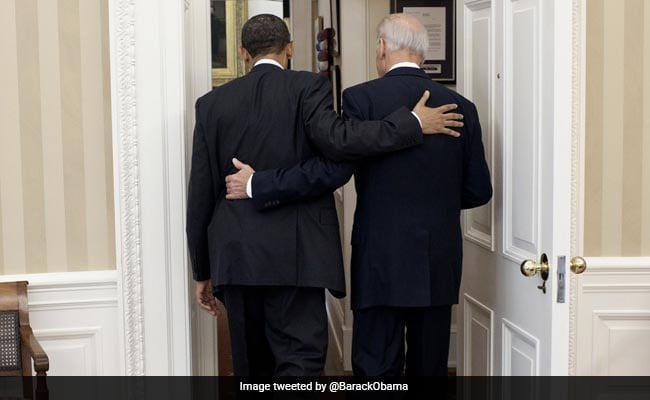 Barack Obama’s tweet on Joe Biden made it to the top 5 most-liked tweets of the year.

For a year that saw the world adjusting to the new normal and the aftermath of COVID-19, it is safe to say that a lot of us spent a lot of time on social media. At least, that is what Twitter’s annual data points to. Twitter users across the world spread the word on all they thought important with ample “likes” and retweets. The most “liked” tweet on the micro-blogging platform in 2021, as per the site’s official blog, was by Joe Biden, after he was sworn in as the 46th president of the United States of America on January 20, 2021.

The simple six-word tweet: “It’s a new day in America” has gathered over 4 million “likes” to date.

It’s a new day in America.

Next on the list of most-liked tweets is one from South Korean singer and songwriter Jungkook. The singer who is a member of the hugely popular K-pop group BTS had posted a selfie posing against a bed frame. The caption only contained a kissing face emoji. The photo has amassed over 3.2 million “likes” since it was posted on January 25.

Coming fourth on the list is another Joe Biden-related tweet, this time from former American president Barack Obama. The tweet says, “Congratulations to my friend, President Joe Biden! This is your time,” and features the two leaders walking arm in arm, with their backs towards the camera. The tweet, shared on January 20, has over 2.7 million “likes”. Mr Biden served as Vice President during the Obama administration.

Congratulations to my friend, President @JoeBiden! This is your time. pic.twitter.com/LXzxGnBAfz

The fifth tweet on the list also has a US presidential election connection. The fifth-most liked tweet came from American vice-president Kamala Harris, who wrote, “Ready to serve.” The tweet has received over 2.2 million “likes” since it was published on January 20, 2021.

As per Twitter data, the most retweeted tweet of 2021 was from the official account of BTS, calling for an end to racism. The tweet contained a statement by the band with the hashtags #StopAsianHate and #StopAAPIHate. The post has been retweeted over 1million times since it was shared on March 30.

Coming to emoticons — which have become inseparable from social media grammar today — the most used emoji on Twitter in 2021 was the crying face emoji. The face with tears of joy emoji came a close second.