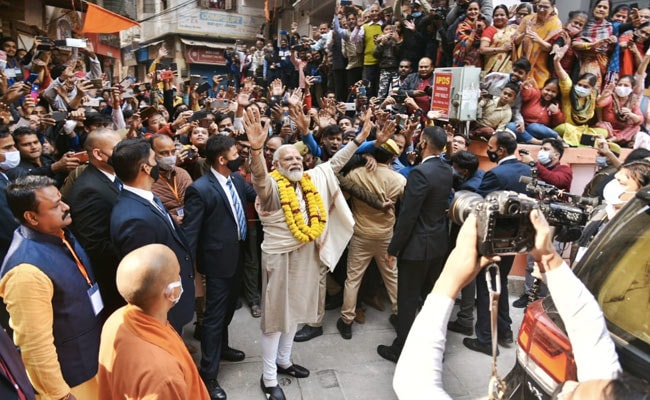 Prime Minister Narendra Modi will today inaugurate the Kashi Vishwanath Corridor project in a grand ceremony, and with 55 high-definition cameras, four jimmy jibs and one huge drone, the national coverage of his event in Varanasi is also set to be “equally monumental”, officials sources said.

A team of about 100 persons, from Doordarshan (DD), including 55 camerapersons, senior officials and other staff are currently camping in the holy city to showcase ”Divya Kashi, Bhavya Kashi”.

“With 55 HD cameras, seven uplink satellite vans, four cellular mobile news gathering units, one RF (radio frequency) camera, four jimmy jibs, and one drone mid-air, it will be a monumental coverage of an event of this nature, and truly massive in scale,” a highly-placed official source told PTI.

Prior to this, PM’s Kedarnath temple visit has also been covered by DD in a big way, but the “Kashi coverage will be truly massive, and equally monumental as the event itself tomorrow”, the source said.

PM Modi will dedicate to the people the ambitious Kashi Vishwanath Corridor in the heart of Varanasi, a mega project that is expected to boost tourism in the ancient city in a big way, after offering prayers at the ancient temple that draws a massive number of visitors from India and abroad.

“The programme will be an experience of ”Divya Kashi” (divine Kashi) and ”Bhavya Kashi” (grand Kashi),” the official said, adding that the PM will dedicate the Kashi Vishwanath Dham to people by “lighting up an ornamental lamp in the presence of a large number of saints and seers”.

Special illumination has been done of the old and new structures located in the premises of the ancient temple site. Over 3,000 seers, figures associated with different religious maths, artistes and other noted people are to assemble at the venue on December 13 to witness the inauguration.

The mega corridor, whose foundation stone was laid by Modi on March 8, 2019, connects the main temple with Lalita Ghat via a corridor, and grand gateways and ornamental arches have been built in heritage architecture style in four directions, facing the ancient temple at its core.

The drone view will also aerially showcase the sprawling premises of the holy shrine, revered by Hindus as one of the 12 Jyotirlingas, after the redevelopment project.