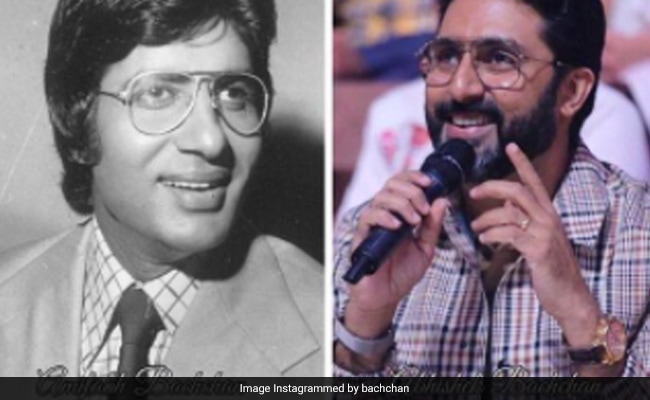 Abhishek Bachchan is his father’s biggest fan and there is ample proof of this in his interviews and social media posts. Given that his father is the legendary Amitabh Bachchan, this comes as no surprise. Now, sending his fans and Instagram followers on a walk down memory lane, Abhishek Bachchan has shared a collage of pictures with images of his father and his own, placed side by side. The images chosen for the collage are a collection of new pictures, throwback photos as well as movie stills. Sharing the post, Abhishek Bachchan wrote, “Like father, like son! My greatest inspiration. Amitabh Bachchan.”

In the hashtags, Abhishek Bachchan referred to the movies from which he had taken the images and he mentions films such as Kasme Vaade, Bob Biswas, Piku and The Big Bull. One look at the pictures and all we can say is Abhishek Bachchan is dad Amitabh Bachchan’s closest doppelganger.

The caption contains lines written in Hindi and they translate to, “My sons are not my inheritors just because we share the same surname. They will be called my sons because they will justify their legacy… My pride, my son, my inheritor.” Abhishek Bachchan, who was overwhelmed by the gesture, wrote, “Speechless. Thank you, Pa. This means the world to me.”

So moved was Abhishek Bachchan by the display of affection by Amitabh Bachchan that he shared the same video on Twitter as well. “Bas, ab aur kya chahiye? (What else do I need now?)” along with lines from the poem Agneepath written by his grandfather, Harivansh Rai Bachchan. Interestingly, one of Amitabh Bachchan’s films that have gone on to attain cult status was named after this very same poem.