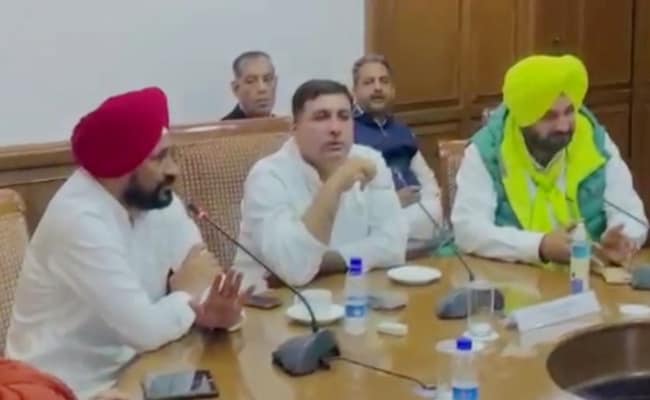 Fearing possible defections amid never-ending power tussles within, the Congress government in Punjab put up a show of unity today, saying that ministers and legislators are firmly behind Chief Minister Charanjit Singh Channi and are grateful for “landmark initiatives” for the state’s overall development.

The meeting took place hours after former Chief Minister Amarinder Singh, who quit after a long-drawn spell of infighting, formally resigned from the Congress and announced his new party. In his letter to Congress president Sonia Gandhi, Mr Singh attacked the top party leadership and said that “concocted numbers” were put before Mrs Gandhi to convince her that state leaders did not back him.

Mr Singh also threatened to reveal names of ministers who were allegedly involved in sand mining during his tenure. Coupled with this, he also hinted that many Congress leaders are in touch with him and may switch to his party. Expectedly, alarm bells rang in the state Congress and a meeting of the Chief Minister with party MLAs and ministers was arranged in which Mr Channi appealed to them to stick together.

Following the meeting, the Chief Minister’s Office put out a statement, saying that the MLAs and ministers had cheered Mr Channi for his “bold decisions”. The statement specifically mentioned the Chief Minister’s move to convene a special Assembly session that sought termination of the centre’s three farm laws and its notification to extend the BSF’s jurisdiction in Punjab. It also said that the party leaders had lauded the Chief Minister for his announcement to slash power rates in Punjab.

State party chief Navjot Singh Sidhu, whose consistent statements at odds with the state government’s stand on a host of issues has emerged as a major problem for the Congress, was present at the meeting.

In a video of the meeting, the Chief Minister is seen telling legislators and ministers that this government still has one-and-a-half months of its tenure left and that he will ensure that all their suggestions are implemented. “Finance won’t be an issue,” he says in an apparent counter to Mr Sidhu who recently said that the state is staring at a “financial emergency”. Towards the end of the video, the Chief Minister appeals to the party leaders to “collectively channelise” their energy and drops a reference that AICC incharge Harish Chaudhary had advised him to rope in poll strategist Prashant Kishor ahead of next year’s polls. This is particularly significant against the backdrop of a perception among the state Congress that in the last state polls, Mr Kishor got Mr Amarinder Singh to make tall promises that he then struggled to fulfill. The Chief Minister’s remarks are a couched hint to the party leaders to stick together so that they retain their autonomy and put their house in order, failing which the high command may wrest control of the situation.