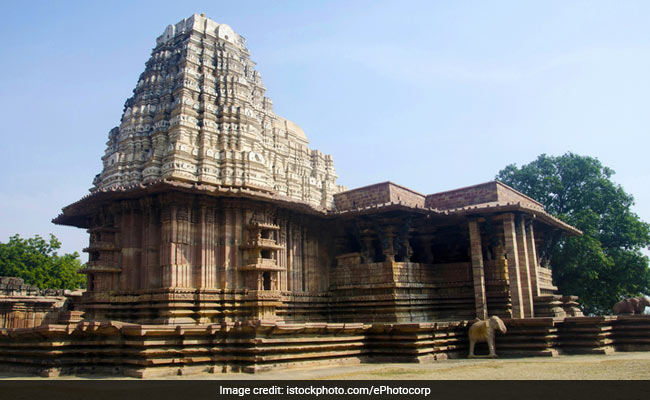 Ramappa temple, a 13th century architectural icon and an engineering marvel that earned the coveted UNESCO heritage tag three months ago, was the highlight of the presentation given by Telangana government officials at an ongoing tourism and culture ministers’ conference in Bengaluru.

A special video showcasing the ornate designs and architectural brilliance of the temple was presented during the opening day of the event on Thursday in the presence of Union Minister for Culture, Tourism And Development Of North Eastern Region G Kishan Reddy, drawing much appreciation from the audience.

Situated in Telangana’s Warangal, the temple stands on a six-feet high star-shaped platform with walls, pillars and ceilings adorned with intricate carvings that attest to the unique skill of the Kakatiyan sculptors.

The two-day conference hosted by the Ministry of Tourism seeks to cast a spotlight on the greater tourism potential and cultural heritage of the southern region, which the minister described as a “treasure trove”.

Five states – Karnataka, Kerala, Andhra Pradesh, Telangana and Tamil Nadu – and three Union Territories – Andaman and Nicobar Islands, Puducherry and Lakshadweep – are taking part in the event being held at a heritage hotel in Bengaluru.

Addressing the conference in the inaugural session, Mr Reddy hailed the listing of the Ramappa Temple as a UNESCO World Heritage Site in July, a news that had brought cheers to India amid COVID-19 that crippled the tourism industry in the country.

A large number of iconic and historic heritage sites are located in the southern region of India.

India at present has 40 World Heritage Sites, both cultural and natural, spanning across the length and breadth of the country.

Telangana was carved out of Andhra Pradesh in 2014. Ramappa Temple is the newly-formed state’s first World Heritage Site.

The temple, named after its architect, Ramappa, was proposed by the government as its only nomination for the UNESCO World Heritage site tag for 2019.

Mr Reddy had then said that owing to the pandemic, the meeting of UNESCO’s World Heritage Committee could not be conducted in 2020 and the nominations for 2020 and those for 2021 were discussed in a series of online meetings earlier this year.

In his address during the inaugural session, Telangana Tourism Minister Srinivas Goud spent a considerable time emphasising the ancient beauty, spiritual value and architectural splendour of the temple that has brought glory and pride to India, with the tourism sector endeavouring to get back on its feet.

Mr Goud was hopeful that the UNESCO tag would bring in more tourists and that the Telangana government was making all efforts to ensure a safer tourism experiences to people who are expected to throng the site, as borders will be open for international travellers soon.

“It’s a great achievement, the World Heritage tag, and we have several other heritage sites of immense value in the state. We look to get more support from the Archaeological Survey of India as well as the Union tourism ministry, to further enhance our cultural sites and showcase those to the rest of India and the world in a beautiful way,” he said.

The Rudreswara (Ramappa) temple was constructed in 1213 AD during the reign of the Kakatiya Empire by Recharla Rudra, a general of Kakatiya king Ganapati Deva. The temple’s presiding deity is Ramalingeswara Swamy, according to the information shared by the Ministry of Culture.

It is also known as the Ramappa temple, after the sculptor who executed the works of the temple for 40 years.

The temple complexes of Kakatiyas have a distinct style, technology and decoration exhibiting the influence of the Kakatiyan sculptor. The Ramappa Temple is a manifestation of this and often stands as a testimonial to the Kakatiyan creative genius, the culture ministry had said soon after the UNESCO tag was conferred to it.

The distinct style of Kakatiyas for the gateways to temple complexes, unique only to this region confirm the highly evolved proportions of aesthetics in temple and town gateways in South India, the Ministry of Culture stated.

European merchants and travellers were mesmerised by the beauty of the temple and one such traveller had remarked that the temple was the “brightest star in the galaxy of medieval temples of the Deccan”.