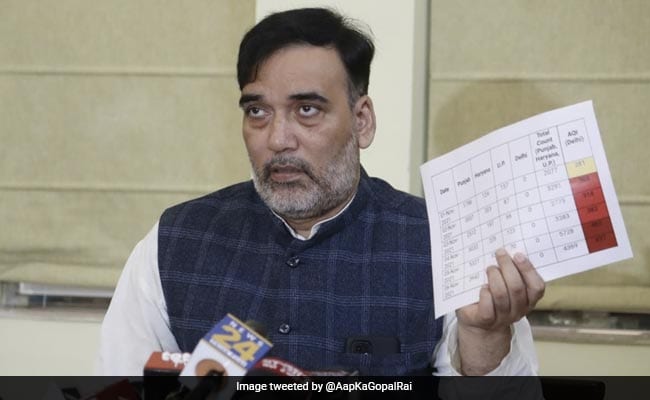 Delhi Environment Minister Gopal Rai on Sunday said his department has issued a notification for effective implementation of the emergency measures announced by the city government to tackle air pollution.

He also said the Aam Aadmi Party (AAP) government will submit a proposal on clamping a lockdown in view of the rising air pollution in the national capital and its modalities to the Supreme Court on Monday.

Mr Rai said all schools, libraries and institutions will remain shut till November 20, except those where exams are being conducted. Construction and demolition activities will be banned till November 17.

The notification issued by the environment secretary of the Delhi government said all construction activities will be closed in the city till November 17 with immediate effect.

It said all offices of the Delhi government, autonomous bodies and corporations will remain closed till November 17, except those involved in emergency services such as health and family welfare, medical establishments, police, the environment department, the public works department and the fire department, among others.

“The government employees of all departments except those involved in emergency services will work from home till November 17. We have issued an advisory to private firms to allow work from home for their employees as well,” Mr Rai said.

He said the main motive behind these emergency measures is to reduce vehicular and dust pollution in Delhi.

The notification issued by the government also said an uninterrupted delivery of public services shall be ensured by all the departments and agencies.

It directed all private offices and establishments to allow their staff to work from home so as to ensure least vehicular movement on roads till November 17.

After an emergency meeting on Saturday, Chief Minister Arvind Kejriwal announced various emergency measures, including a closure of schools and colleges for a week, a ban on construction activities and work from home for government employees, to deal with the pollution crisis in the city.

After the meeting, the chief minister told reporters that his government will also present a proposal for clamping a lockdown in Delhi before the Supreme Court.

Terming the rise in air pollution in Delhi-NCR an “emergency” situation, the apex court asked the Centre and the Delhi government on Saturday to take immediate measures to improve the air quality and suggested steps such as stopping vehicles and clamping a lockdown in the national capital.

The Delhi government released a statement, in which it quoted Mr Rai as saying that on November 9, a high-level meeting was conducted and it was decided that five strict steps will be taken to provide relief to the people of the city from the pollution problem as soon as possible.

Mr Rai said according to a decision taken at the meeting, an anti-open burning campaign will be run from November 11 to December 11.

“Apart from this, the concerned departments have been directed to shut down diesel generator sets and coal kilns in Delhi, increase parking fees, increase the frequency of metro and bus and provide heaters to guards from RWAs,” the minister was quoted as saying in the statement.

He added that the second phase of the anti-dust campaign is being run from November 12 and will continue for a month.

“Instead of 114 tankers, now 400 tankers will be sprinkling water to settle dust. Also, by November 20, the Delhi government will complete the work of spraying bio-decomposer solution for stubble decomposition in 4,000 acres of fields,” Mr Rai said.

He also appealed for effective coordination among the NCR states to tackle the pollution crisis in the region.