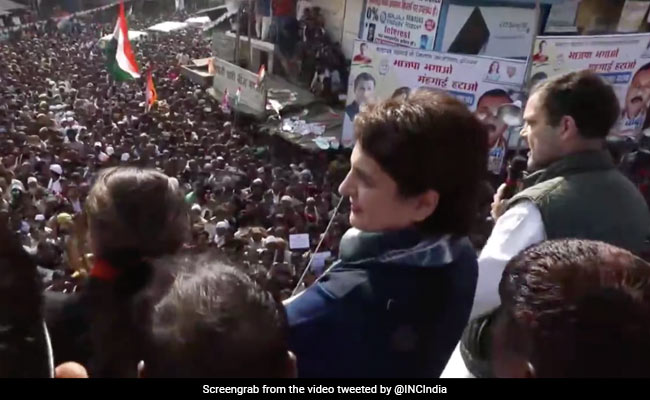 Rahul Gandhi led the Congress’s no-holds-barred attack on the central government today as he led a march in Uttar Pradesh’s Amethi, his former Lok Sabha constituency. Priyanka Gandhi Vadhra, his sister and the party’s UP in charge, was by his side as the Congress finds its feet in the state while the BJP works hard to secure a second straight term.

As he visited Amethi for the second time since the 2019 Lok Sabha loss, Mr Gandhi, 51, said, “Every lane in Amethi is still the same. Only that there’s anger against the government in people’s eyes. “

“In the hearts, there is space just like before. We are still united against injustice,” he added as he led the anti-inflation rally.

India’s border dispute with China, farmers’ deaths at protest sites, and “Hindu vs Hindutvawadi” jibe at the BJP figured in his speech.

“A Hindu spends his whole life walking on the path of truth. A Hindu never succumbs to his fear – he faces all his fears. He never lets his fear turn into anger, hatred. But a Hindutvawadi only uses lies to stay in power. Mahatma Gandhi ji said a Hindu’s path is that of satyagraha,” said Mr Gandhi, Congress MP from Kerala’s Wayanad.

Amethi had been a Congress stronghold till Rahul Gandhi lost to the BJP’s Smriti Irani in 2019 by over 50,000 votes.

This was one of the many blows that came the party’s way ever since the BJP took charge at the centre in 2014.

Today’s six-km foot march in Amethi comes exactly a week after top Congress leaders – including Sonia Gandhi – held a rally in Rajasthan to highlight, what they called, centre’s failures.  Rahul Gandhi had lashed out at the BJP with the “Hindu vs Hindutvawadi” jibe in Rajasthan too.

Prime Minister Narendra Modi has also been frequenting the state over the last few weeks to launch several government projects months ahead of the polls.

The launch of all these projects just before polls, however, has also led to attacks from rivals.