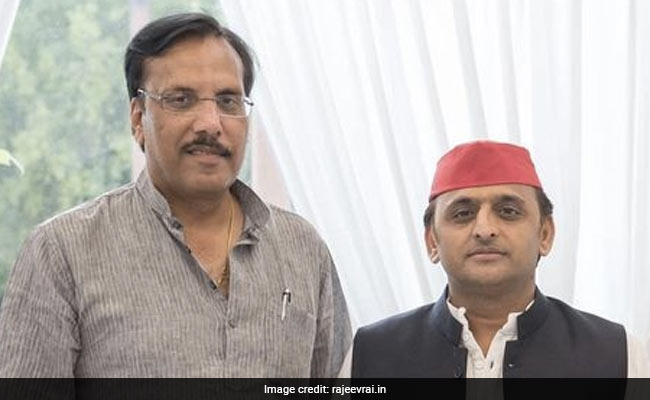 A team from the Income Tax department from Varanasi reached Mr Rai’s home this morning in eastern UP’s Mau district.

Mr Rai owns a group that runs many educational institutions in Karnataka.  “I’ve no criminal background or black money. I help people and the government didn’t like it. This is a result of that. If you do anything, they’ll make a video, register an FIR, you’ll fight a case unnecessarily,” he said while talking to reporters at the gates of his residence earlier today.  In 2014, Mr Rai was the Lok Sabha candidate from the Ghosi constituency.

“Rajeev Rai is the National Secretary and spokesperson of Samajwadi Party. He is credited with being the man behind the success of forming the 1st Samajwadi Party government in UP in 2012 and is the media face of the party,” his official website reads.

Another aide of Akhilesh Yadav has been raided in Mainpuri – a stronghold of the Yadav family. Manoj Yadav, who has been raided there, is the promoter of a group of companies called the RCL group.

The raids come just ahead of the crucial assembly elections as the state sees Mr Yadav hitting out at the BJP over the projects that have been recently launched by Prime Minister Narendra Modi in UP.

While he claims all of these projects were started during his tenure, the BJP has said it’s just an attempt to take credit with an eye on polls.

Some analysts say Akhilesh Yadav has emerged as a key challenger to the BJP in the UP elections.