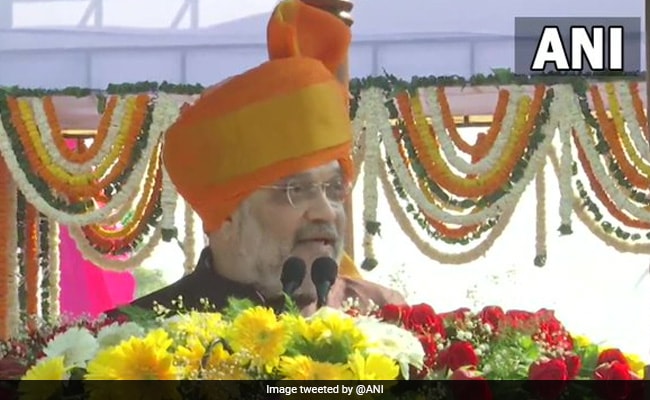 Amit Shah was addressing the 75th Raising Day parade of the force.

Union Home Minister Amit Shah on Wednesday lauded the Delhi Police for its “strict” and “fair” investigation in the northeast Delhi riots and said the force should lay out a road map for the next five years and also for 25 years.

Mr Shah, who was addressing the 75th Raising Day parade of Delhi Police said, the force not only did an “exceptional job” during the COVID-19 pandemic but also thwarted several terror attempts during the period.

“The Delhi Police has worked hard during the northeast Delhi riots and the coronavirus pandemic. For the way the Delhi Police investigated the riot cases in a strict and fair manner and presented the rioters in court, I congratulate them,” Mr Shah said.

The minister said the Delhi Police faces several difficulties and being the police force of the national capital, it has several duties that include providing security to dignitaries, ensuring that various programmes happen without glitches and other law and order related matters.

“Whenever any event happens at an international level, its repercussions are also felt in Delhi. The police also has the job of monitoring the situation here,” he said.

Mr Shah said the 75th birthday of the Delhi Police coincides with the Azadi Ka Amrit Mahotsav celebrations and stressed that the force should prepare a road map for the next five years.

“The Delhi Police has changed with the times. I urge the Delhi Police commissioner and the Union home secretary to prepare a road map for the next five years and 25 years with well-defined goals,” he said.

Paying tribute to the 79 police personnel who lost their lives during the pandemic, he praised the efforts of the force by battling the pandemic by standing in front row.

Recalling the Delhi police’s contribution during the pandemic, Shah said, “the police personnel attended people whose families weren’t here, took them for testing, got them hospitalised and provided oxygen cylinders to those who were in need. They even helped in performing last rites during the difficult times” “The kind of work Delhi Police did will be an inspiration for the police forces across the country and will be a pathway for other state polices to follow. During the period, the force also thwarted several terror attempts,” he added.

Mr Shah said the newly created perception management cell would help in improving the image of the city police.