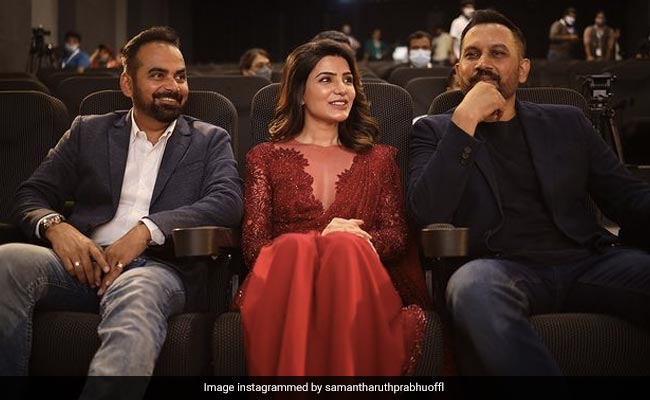 Samantha Ruth Prabhu had a Sunday evening that would make most of us jealous. The actress attended the International Film Festival of India (IFFI) in Goa with members of The Family Man  2 team. The star shared pictures from the 52nd edition of IFFI where she is seen sitting in the audience with director duo Raj Nidimoru and Krishna DK, who helmed the web series in which the actress played the lead antagonist. In the caption of the post, Samantha Ruth Prabhu wrote, “About last night at IFFI Goa. With the people who make all the difference,” tagging actor Manoj Bajpayee,  directors Raj and DK and Aparna Purohit of  Amazon Prime Video. She also added, “An evening to remember.”

The images also show Samantha Ruth Prabhu along with Raj and DK as well as Aparna Purohit on stage, speaking about The Family Man 2 at the festival. The photo shows Manoj Bajpayee attending the session virtually.

On the occasion, Samantha Ruth Prabhu wowed fans in a red saree gown created by her friend and designer, Kresha Bajaj. Sharing a photo of herself in the lovely ensemble, the actress wrote, “Red magic.”

She also shared the images on Instagram Stories and wrote about the garment. Samantha Ruth Prabhu wrote, “In the outfit, I didn’t know I needed.” 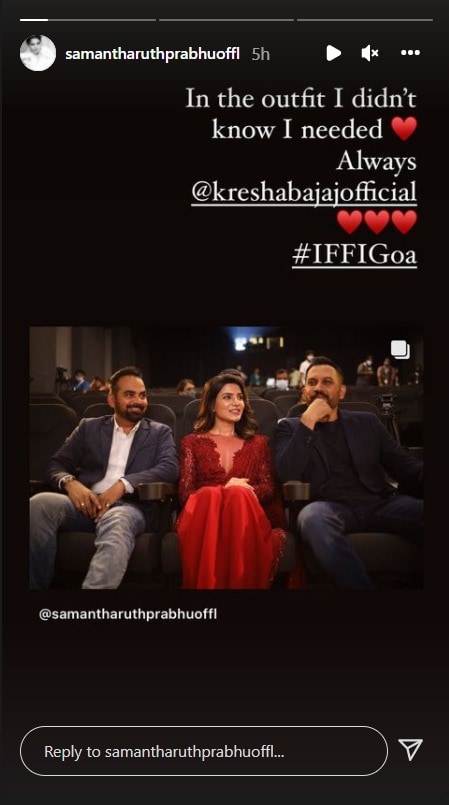 While Samantha Ruth Prabhu is basking in the well-deserved praise that is coming her way for The Family Man 2, she is also busy with a bunch of upcoming projects. On top of the list is her much-awaited Tamil film Kaathuvaakula Rendu Kaadhal in which she is sharing screen space with Nayanthara and Vijay Sethupati.

Recently, the actress shared a picture from the sets of the film as the cast and crew celebrated Nayanthara’s birthday. Dedicating a post to Nayanthara, Samantha Ruth Prahu wrote, “She came. She saw. She dared. She dreamed. She performed and she conquered. Happy birthday Nayan.”

Reacting to the post, actress Raashii Khanna wrote, “So cute!”

The director of the film, Vignesh Shivan also released the first look poster of Samantha Ruth Prabhu in the film. The actress, the poster revealed, plays a character named Khatija in the film.

Samantha Ruth Prabhu made her debut with the 2010 film Ye Maaya Chesave with Naga Chaitanya. The actress is known for her work in films such as Eega, Dookudu, Seethamma Vakitlo Sirimalle Chettu, Attarintiki Daredi, Kaththi, Super Deluxe, Majili, and Oh! Baby among others. Samantha Ruth Prabhu married Naga Chaitanya in 2017 and the couple announced their separation in October 2021.