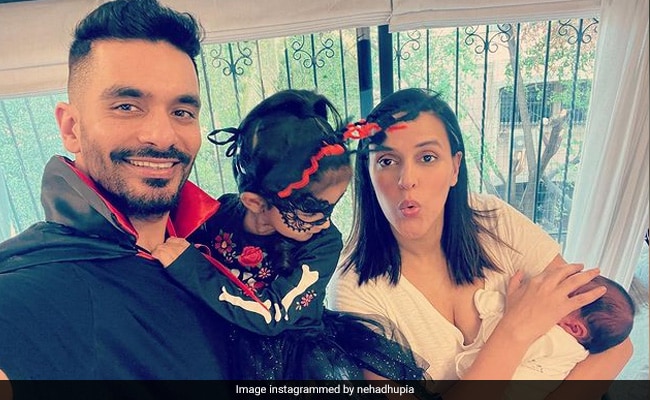 Neha Dhupia is celebrating Halloween with her family and has shared lovely pictures with fans on social media on the occasion. The new mother has shared a bunch of photos in which she is seen with her husband, Angad Bedi and daughter Mehr Dhupia Bedi. In the pictures, while Angad is dressed as a vampire, Mehr is seen with a mask and a black costume with a skeleton drawn on it. In the first image, Neha Dhupia is seen with her  baby boy in her arms, and Angad and Mehr by her side. While Neha and Angad are posing for the camera, Mehr is seen to be distracted by her brother. In the second image too, which is a selfie with Mehr and Angad, the little one is looking away from the camera.

Sharing the images, Neha wrote, “Boo.. clearly half of us had the time to trick and the rest of us were busy with the treat.” The rest of the pictures show Mehr dressed as a fairy as well as a pumpkin. Along with the images, Neha Dhupia added the hashtags “Halloween”, “4 of us” and “Dhupia Bedi”.

Angad Bedi, too, shared a Reels clip in which he is seen posing as a vampire, only to have little Mehr come to him and envelope him in a hug. Sharing the video, he wrote, “Trick or treat.”

Angad Bedi and Neha Dhupia welcomed their son earlier this month and shared the news with a lovely note. Posting an image from their pregnancy photoshoot, Angad wrote, “Bedis boy is here!!!!!! The almighty today blessed us with a baby boy. Both Neha and the baby are well. Mehr is ready to pass on the “baby” title to the new arrival. Waheguru mehr kare. Neha Dhupia, thank you for being such a warrior through this journey. Let’s make it a memorable one for all 4 of us now.”

Angad Bedi also shared another image, in which he is seen hugging a pregnant Neha Dhupia. He wrote, “I’m your baby daddy! Thank you for everything, Mrs Bedi. You complete me.”

Angad Bedi and Neha Dhupia have been married since 2018. Their daughter Mehr was born the same year. Neha Dhupia is known for her work in Devi, Singh Is Kinng, Tumhari Sulu, and Lust Stories. Angad Bedi, meanwhile, is known for his work in  Pink, Dear Zindagi and Tiger Zinda Hai.