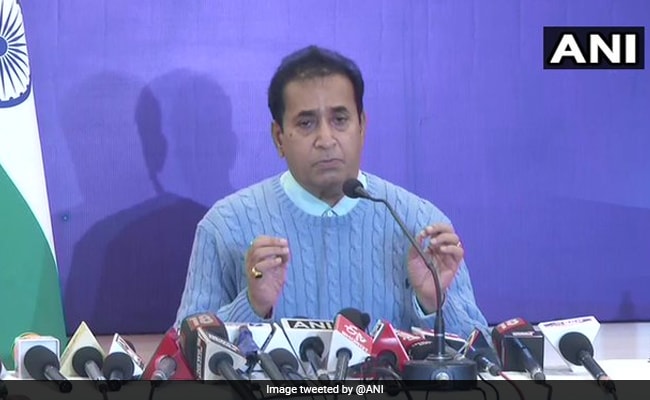 The Enforcement Directorate (ED) on Tuesday told a special holiday court in Mumbai that Anil Deshmukh, Maharashtra’s former home minister, was the “prime beneficiary” of proceeds of crime and directly involved in the offence of money laundering in which he has been arrested.

The central agency, in its remand note, said the NCP leader, sent to the ED custody till November 6, has emerged as an “important cog in the wheels” in the case, in which there has been an allegation of collection of Rs 100 crore, and maintained the involvement of foreign angle cannot be ruled out.

As per the ED, from December 2020 to February 2021, Mr Deshmukh had collected Rs 4.70 crore in bribe money from then-assistant police inspector Sachin Waze (later dismissed from service in another criminal case), who had extorted the same from bars and restaurants across Mumbai.

Mr Deshmukh (71), who was arrested by the ED on late Monday night after 12 hours of questioning, was produced before additional sessions judge P B Jadhav, who is presiding over the special holiday court, on Tuesday.

The former minister had skipped multiple summonses issued by the ED in the case, but after the Bombay High Court last week refused to quash them, he appeared before the agency on Monday.

The agency, while seeking 14-day custody of Mr Deshmukh, said his custodial interrogation was the need of the hour in the interest of the ongoing investigation and that the entire money trail requires to be established in order to bring the guilty to book.

However, the court remanded the former minister to ED’s remand till November 6, meaning he will spend Diwali in custody.

The court allowed Mr Deshmukh, who resigned from the state cabinet in April this year, to get home food and also permitted his lawyer to remain present at an audible distance while he is being interrogated by the ED.

“Anil Deshmukh has emerged as an important cog in the wheels. It is, therefore, imperative for the investigation to interrogate the accused in custody in order to draw a logical conclusion in the case. The involvement of foreign angle cannot be ruled out at this stage,” the financial probe agency said in its remand note.

“The accused above named (Mr Deshmukh) has played a very crucial role in the offence of money laundering. He has not cooperated with the investigation. He has not provided the required information regarding the laundering of the proceeds of crime,” the agency said.

Hence, sustained interrogation under custody was required to unearth the trail of funds and for corroboration and confrontation with other persons involved in the case, it added.

The note further said the ED has recorded statements of certain bar owners and managers who have stated that a meeting was held by dismissed cop Mr Waze with them regarding collection of money for smooth functioning of their establishments.

“Sachin Waze had informed the bar owners/managers that the money collected will go to “No 1″ and crime branch and social service branch of the Mumbai police. Thus, it is seen that Sachin Waze had collected money amounting to Rs 4.70 crore from various bar owners and managers,” the ED said.

It added that the agency had recorded Mr Waze’s statement in May 2021 during which he said he used to get direct instructions from Mr Deshmukh in different police cases.

Mr Waze, arrested in March 2021 by the NIA in the Antilia bomb scare-Mansukh Hiran murder case, is lodged in Navi Mumbai’s Taloja jail.

“He (Mr Waze) categorically stated that “No 1″ was Anil Deshmukh, the then home minister of Maharashtra,” the ED said.

“He (Mr Waze) stated that he was called by Anil Deshmukh at his official residence and was asked to collect Rs 3 lakh per month from each bar and restaurant. He stated that he had collected approx Rs 4.70 crore from December 2020 to February 2021 and had handed over the same to Kundan Shinde, the then personal assistant to Anil Deshmukh,” the agency alleged.

This bribe money was used by Mr Deshmukh through his son Hrishikesh Deshmukh for providing cash to some Delhi-based paper companies and it was finally laundered to the Nagpur-based Shri Sai Shikshan Sanstha, an education trust controlled by the former minister’s family, it claimed.

The agency claimed that Mr Deshmukh failed to appear before it despite issuance of multiple summonses and when he did appear on Monday, the NCP leader was “non-cooperative and evasive” in his replies.

As per the ED, Mr Deshmukh used to give instructions to Sanjeev Palande, his then-private secretary, to be passed on to Mr Waze.

“(Mr) Palande used to organise meetings and handle the collection of monies from bars and further, analysing and assessing the work of collection of tainted monies through police officials on behalf of Anil Deshmukh,” the ED said.

The ED said as per investigation, there are 27 companies that are in the names of close associates of the Deshmukh family and are controlled by his family members. Of these, 13 companies are directly owned by Anil Deshmukh, while the remaining firms are indirectly controlled.

The agency said some companies were used only for rotation of funds.

Mr Deshmukh’s counsel Vikram Chaudhri and advocate Aniket Nikam, however, opposed the remand plea and argued the ED had no locus standi to investigate.

It may be noted that the case against the senior politician stems from a CBI FIR.

The Bombay High Court had only directed the CBI to probe the allegations against Deshmukh. No one asked the ED to investigate, Mr Chaudhri told the court.

He further informed the court that Mr Deshmukh is a senior citizen whose shoulder is dislocated and hence needs constant support. “He suffered from COVID-19 this February and is suffering from heart ailments and hypertension,” Mr Chaudhri said.

Mr Chaudhari argued the ED had submitted before the HC and the SC that Mr Deshmukh is at worse a suspect and not an accused so far.

He said the ED put up a ruse before the courts that they are examining with an open mind. “A false impression was created when the sole intention was to invade my liberty. What has transpired that you changed his status from suspect to accused?” Mr Chaudhari sought to know on behalf of his client.

The lawyer submitted the PMLA Act says arrest should take place in exceptional cases and the ED case against Mr Deshmukh has political overtones.

“The investigating agency should act in such a manner that there is transparency and not with any vested interests. He was exercising his constitutional remedies by approaching courts, he was not absconding,” he said.

Though the HC had given the NCP leader the opportunity to approach court to file an ABA (anticipatory bail application), he didn’t go for it. He went before the agency by himself to co-operate with the probe, Mr Chaudhari said.

The ED had initiated a probe against Mr Deshmukh and his associates after the CBI filed its FIR against the NCP leader on April 21 on charges of corruption and misuse of official position.

Mr Deshmukh had refuted these allegations earlier and had said the agency’s whole case was based on the malicious statements made by a tainted cop (Mr Waze).

The case against Mr Deshmukh and others was made out after the CBI booked him in a corruption case related to allegations of at least Rs 100 crore bribery made by ex-Mumbai Police commissioner Param Bir Singh.

The agency last month submitted its prosecution complaint (equivalent to a charge sheet) against the duo before a special court.