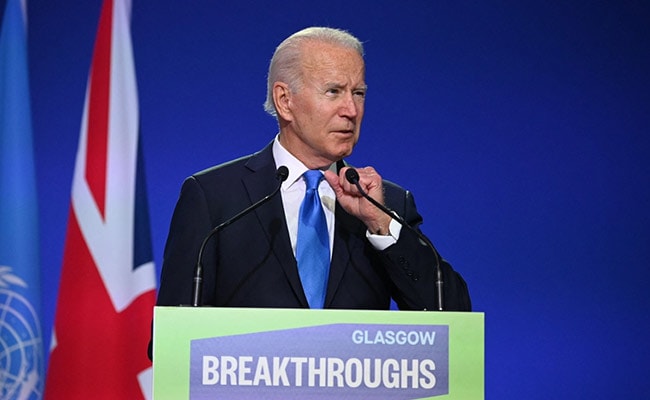 “I guess I shouldn’t apologise but I do,” Joe Biden said at Glasgow.

He laughs, he cries, he says sorry. For the most powerful man in the world, President Joe Biden sure shows his soft side a lot.

On Monday, he was apologising in Glasgow on behalf of the United States for Donald Trump, whom he defeated exactly a year ago. The day before, in Rome, Biden came close to tears when talking about his dead son and the pope.

And that was just during his Europe trip, attending twin G20 and UN climate summits before flying home later Tuesday.

Trump was all macho bluster and Barack Obama oozed smooth self-confidence, but Biden wears his heart on his sleeve.

Ignoring the politician’s credo that apologies demonstrate weakness, he says sorry all the time. He’s sorry for being late, for talking too long, for being boring, or for not being as good as those around him.

Often the apologies are part of gentle self-deprecation. “Hey everyone, I’m Jill’s husband,” goes his favourite opening line, whenever First Lady Jill Biden is around.

His response to bad news — there’s a lot of it for Biden these days — is largely to flash a smile and chuckle.

When it became clear last month that he’d failed to get congressional backing for providing all Americans free community college, the 78-year-old joked that Jill, herself a community college professor, was kicking him out of bed.

“The White House has a lot of bedrooms,” he said.

Sorry for being sorry

Monday’s apology for the fact that Trump had yanked the United States from the Paris Accord on saving the planet from global warming was classic Biden: he began by apologising for apologising.

“I guess I shouldn’t apologise but I do,” he said.

His emotional remarks the previous day about his beloved son Beau, who died of brain cancer in 2015, were extraordinary for their sheer openness.

He initially suggested that he wouldn’t answer a reporter’s question about what his meeting at the Vatican with Pope Francis had meant to him, saying it was “personal.”

But the floodgates opened as he recalled how the pope, while on a visit to the United States, had reached out to support his family in the wake of Beau’s death.

The “wounds were still raw” and the pope had “such a cathartic impact,” he said, his voice cracking.

Biden’s emotional approach is not just his personality. It’s a political brand.

Pitching himself as “middle class Joe,” a train-and-cars buff with rough-edged roots in Scranton and Delaware, he’s too real to put on the airs of a regular politician.

Given his age and now immense responsibility, the public persona has evolved into something like the wise, yet still playful elderly uncle.

Does it work? Not for everyone.

Milder detractors say Biden is too feeble for the savage political infighting in Washington. They highlight the inability so far to force his own party to get his massive infrastructure and social spending package through Congress.

Harder line critics go much further, whether questioning his mental acuity or, in the case of Trump and his acolytes, spreading conspiracy theories about Biden being a puppet in the White House.

The nastier the mockery, the more enthusiastic Trumpworld voters become. Chants of “Let’s go Brandon,” a now viral euphemism for an obscenity about Biden, have broken out at sports games around the country, egged on by Republican members of Congress.

No question that nine months into his administration and 12 months since his November 3, 2020 victory, Biden faces trouble.

Trump trolls Biden daily, lying that he was the real winner in 2020, while plotting a 2024 comeback.

And Democrats are in a panic over the possibility that their candidate for governor in Virginia will lose his election Tuesday, presaging loss of the whole Congress in next year’s midterms.

Yet for all his sentimentality, Biden doesn’t seem to let the gloom get to him.

An exasperated “C’mon man!” is often about as far as he’ll go.