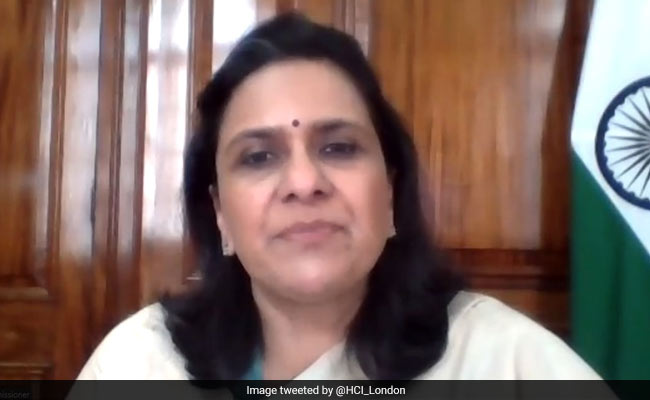 Prime Minister Narendra Modi’s visit to the UK comes at a time when India-UK bilateral relations are on a positive trajectory and potentially at the threshold of a new era, India’s High Commissioner to the UK Gaitri Issar Kumar has said.

PM Modi will attend the World Leaders’ Summit (WLS) of the UN COP26 climate conference in Glasgow, with bilateral talks planned with his British counterpart Boris Johnson on the sidelines of the summit, scheduled over Monday and Tuesday.

India’s envoy in Britain noted that in preparation for the bilateral engagement, discussions have progressed on a full range of issues – from consular relations to maritime security and space as well as cooperation at the UN and other multilateral fora.

“The India-UK partnership is on a very positive trajectory, potentially at the threshold of a new era,” Ms Kumar told PTI in an interview on the eve of the Modi’s UK visit.

“It is comprehensive, a strategic partnership, covering an ever-expanding range of areas of human activity; underpinned, as it should be, by an efficient institutional framework.

“Our leaders have a shared vision of how best both nations can realise the full potential of our many complementary strengths – bilaterally and on global issues,” she said.

The High Commissioner confirmed that the 2030 Roadmap agreed between Prime Minister Modi and his British counterpart Johnson in May remains on track with its aim to more than double bilateral trade by 2030, following a series of trade delegation exchanges between the two countries.

“Both governments remain committed to the implementation of the roadmap within prescribed timelines. Accordingly, we are looking to launch negotiations in November 2021 for an Interim Agreement to be signed in March 2022 and eventually a comprehensive agreement, if all goes according to schedule, by November 2022,” she said.

The senior diplomat stressed that Prime Minister Modi’s three-day UK visit takes on added significance in the year being celebrated as marking 75 years of India-UK relations.

Ms Kumar, who was in India earlier this month for UK Foreign Secretary Liz Truss’ visit to New Delhi and Mumbai, referred to the most recent ministerial exchange as “fruitful” in moving the bilateral agenda forward.

“The recent visit to India of the UK’s Carrier Strike Group (CSG) is a manifestation of an increased engagement between the two countries in the defence and security sector. There exists a commonality of concern and commitment on regional and global security related issues,” said the High Commissioner.

She said: “With much convergence of our interests in the Indian Ocean region, it is but natural that we have increased our engagement in defence and security. In fact, India’s defence modernisation programme presents an opportunity – we envisage a partnership involving co-development of designs and technology, as well as joint manufacturing.

“The UK is an important ally for India in defending the rules-based international order. At a time when the global governance systems face unprecedented challenges, both democracies – committed to upholding the rules-based order – can play a key role in preserving principles that strengthen core institutions.”

The envoy noted that joint initiatives on global themes have been made possible as a result of India and the UK taking the lead in bringing solutions, reflecting post-Brexit Britain’s more “independent” approach.

“In technology, trade and a transformational approach to new opportunities and challenges, we have seen a fair amount of success already and have set for ourselves further goals with a higher level of ambition.

“As a global force for good, India and the UK continue to develop the partnership on vaccines, therapeutics and diagnostics through the institutional dialogue process on strategic priorities for collaboration in the health sector,” Ms Kumar said.

On the issue of climate action ahead of COP26, the High Commissioner described both countries as “partners” in global climate mitigation initiatives like the International Solar Alliance (ISA) and the Coalition for Disaster Resilient Infrastructure (CDRI).