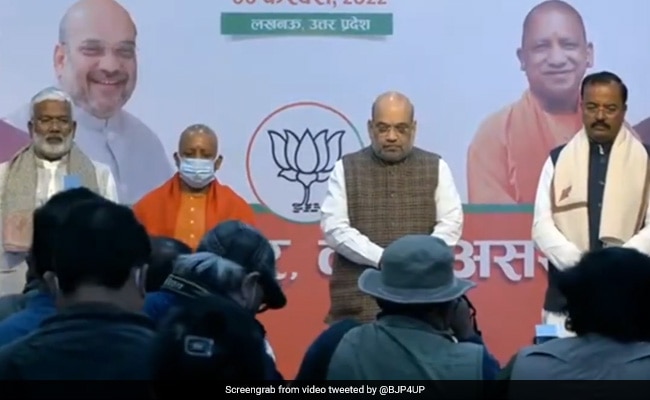 The party leaders held a two-minute silence for Lata Mangeshkar at the programme in Lucknow.

The BJP has cancelled the launch of its manifesto for the elections in Uttar Pradesh as a mark to respect to Lata Mangeshkar, who died today at the age of 92. The government has announced a two-day mourning for the iconic singer, whose state funeral will be held at Mumbai’s Shivaji Park this evening.

The Uttar Pradesh BJP’s programme to launch the manifesto, for which Union minister Amit Shah, Chief Minister Yogi Adityanath, his deputy Keshav Maurya and state party chief Swatantra Dev were in Lucknow, was called off and the leaders held a two-minute silence for the artiste.

The party said it will later announce a date for the launch of the manifesto for Uttar Pradesh, where the first phase of assembly election is due on February 10.

“Due to sad demise of Lata Mangeshkar, we are postponing release of Lok Kalyan Sankalp Patra (party manifesto). We will decide the next date for its release later,” said the party’s state unit president Swatantra Dev Singh.

The BJP has put a few of its other political programmes on hold as well, including Prime Minister Narendra Modi’s virtual rally for Goa.

Earlier today, Prime Minister Narendra Modi was among the first to tweet his condolences.

“I am anguished beyond words. The kind and caring Lata Didi has left us. She leaves a void in our nation that cannot be filled. The coming generations will remember her as a stalwart of Indian culture, whose melodious voice had an unparalleled ability to mesmerise people,” his post read.

Lata Mangeshkar was admitted to Mumbai’s Breach Candy hospital on January 8 after she was diagnosed with Covid and pneumonia. Though she had recovered from Covid, the artiste was put on ventilator support after her condition worsened on Saturday.

A two-day national mourning will be observed in her memory and the national flag will fly at half-mast.