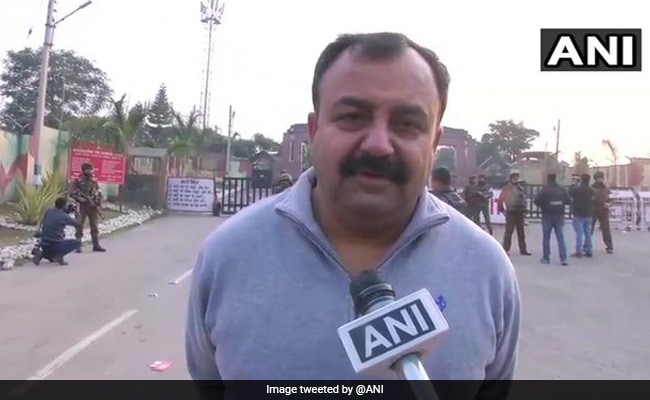 BJP’s Vikram Randhawa has been accused of hate speech. (File)

A case has been filed in Jammu and Kashmir against the BJP’s Vikram Randhawa, a day after he was criticised by the party over his “unacceptable” remarks against Muslims. The former MLA from Jammu was seen making the objectionable comments in a video after Pakistan’s win in the T20 World Cup match against India. He has been removed from all party posts.

Vikram Randhawa has been issued a show-cause notice by the BJP. The party has asked him to give an explanation and make a public apology within 48 hours.

The case mentions Section 295-A, which pertains to deliberate and malicious acts, intended to outrage religious feelings of any class by insulting its religion or religious belief, and Section 505 (2), which gives powers to the police to arrest anyone who makes a statement which creates or promotes enmity, hatred or ill-will between classes.

This is the second time when the BJP has issued a show-cause notice against Mr Randhawa this year.

In the show-cause notice, the BJP said that his remarks have brought “disrepute to the party”.

“A video has gone viral in social media in which you are seen making absolutely reckless and hatred promoting remarks against particular Community. This is unacceptable to the party and has brought to disrepute and embarrassment  to the party,” reads the notice.

“Such type of conduct is likely to dent the public image of the party. As a senior leader and former legislator, it is expected of you to conduct yourself in public in a manner which is as per party principles,” the notice added.

The party admits that the show-cause notice against Mr Randhawa in the past didn’t create a desirable impact and asked him to put a public apology within 48 hours.

Officials say the BJP leader made the controversial remarks during a public meeting in Jammu a few days ago where he talked about Kashmiris celebrating Pakistan’s victory in T20 World Cup.

All senior leaders in Kashmir have condemned his remarks, and demanded action against him.

Official sources say the case has been filed against the BJP leader for “hurting religious sentiments” and “promoting enmity between religious groups” at Trikota Nagar Police station in Jammu.