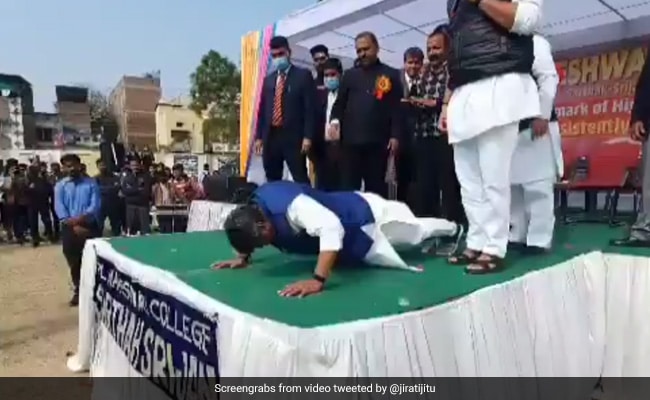 Kailash Vijayvargiya was invited to the annual day function of a college Indore.

Kailash Vijayvargiya, 65, surprised everyone with his fitness recently. The senior BJP leader did more than 40 push-ups during a college event in Madhya Pradesh. He was invited, as the chief guest, to the annual day function of RPL Maheshwari College in Indore.

A video of the BJP national general secretary doing push-ups on stage has now gone viral. It has been shared by state BJP leader Jitu Jirati.

As Mr Vijayvargiya does the exercise, members of the audience count the push-ups and encourage him to keep going.

Several people praised the BJP leader’s fitness, including one who compared him to a wrestler.

However, some were not impressed by what they suggested was a half-hearted approach.

Before this, Mr Vijayvargiya had tried his hand at singing. He and Madhya Pradesh Chief Minister Shivraj Singh Chauhan together sang a few timeless Hindi numbers at a “bhutta party” organised at the state assembly building. The BJP veterans sang the friendship song from Sholay, Yeh Dosti Hum Nahi Todenge, and the melodious number Hume Tumse Pyaar Kitna, from the film Kudrat.

Their camaraderie was captured on camera and Mr Vijayvargiya also shared it on his Twitter account, recalling that they would regularly sing this song during their Yuva Morcha days.

The “bhutta party”  was attended by both the ruling party and the Opposition.