There is no doubt that India worships its film stars – sometimes literally. And when a beloved star, at the height of his popularity, dies an unexpected and untimely death, the emotions of the fans are right there for the world to see.

From the moment news spread on Friday that Puneeth Rajkumar was admitted to hospital after a heart attack, fans began gathering outside the private hospital in central Bengaluru where he had been admitted. The youngest son of superstar Dr Rajkumar had been in the public eye as a child star, Master Lohit – and the songs he sang at that time are still very familiar across Karnataka. His first film as an adult in 2002 was the super hit, Appu – and ‘Appu’ was the name on the lips of the film-loving public mourning his death. 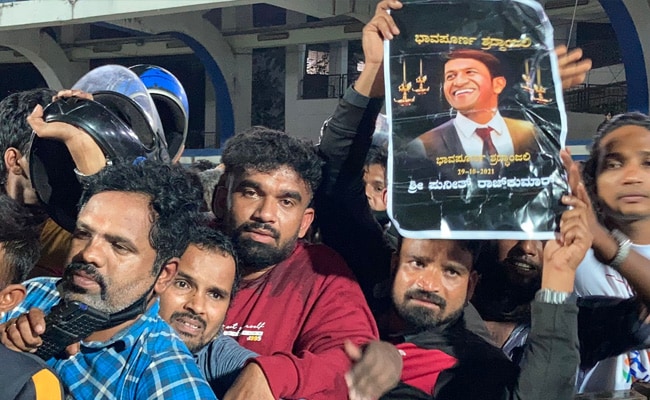 Fans trying to catch a last glimpse of their beloved star.

From the hospital, his body was taken to his home, where his eyes were collected for donation. His father had also expressed the wish for his eyes to be donated – and that was done back in 2006 when Dr Rajkumar passed away. The crowds made their way to the Sadashivanagar residence of the family. 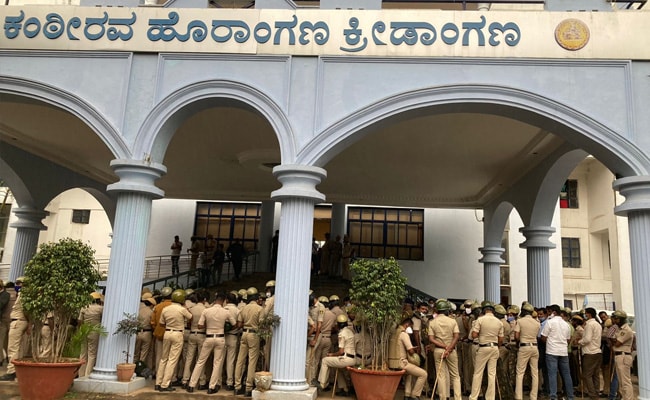 Once it was clear that the public would be allowed to pay their respects to Puneeth at Kanteerava Stadium, many began making their way there. We reached the stadium shortly before 4 pm – and already there were groups of solemn people waiting outside the fence of the stadium opposite Bengaluru’s Cubbon Park. Some held copies of Ee Sanje, an evening paper that carried photographs of Puneeth on its front page – as a child star, and with his parents. Puneeth Rajkumar’s body was brought to the Kanteerava Stadium.

The crowds began to gather very soon. There were police vans with water jets – and 6,000 police staff on duty around the city to keep the peace. Inside the stadium, swift preparations were being made for the public viewing.

A corridor of firm barricades was erected – starting from one of the gates of the stadium that led to where the casket would be kept. It led away to another exit. 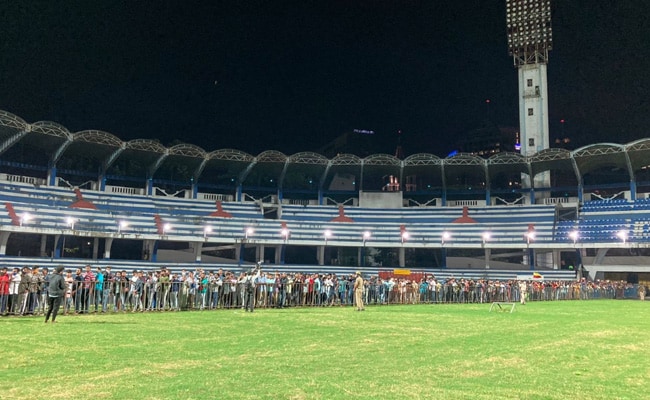 Thousands of fans made their way to the stadium on Friday evening.

A shelter was rigged up over the location of the casket. It was a grey, rainy evening – and there were showers that came and went as it grew darker over the stadium.

Around 7 pm, the ambulance carrying the body of Puneeth Rajkumar entered the stadium. It carried a smiling picture of the star. The coffin was carried to the viewing position and the family members took their place beside it. Puneeth Rajkumar’s body was brought to the stadium around 7 pm.

Shortly after, the fans who had waited for hours were let it. They came in running down the corridor between the barricades, mobile phones ready to take a last picture of their hero. Some carried pictures of him, others the evening newspaper. As we approached to talk to them, the chants of ‘Appu! Appu!’ grew louder. 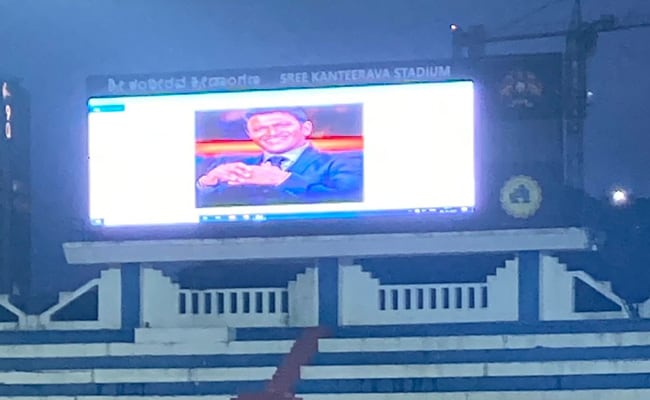 Puneeth Rajkumar’s images and visuals of the fans were projected on the giant LED screen.

The barricades at one stage seemed in danger of falling with the pressure of the people – and police personnel rushed in to make sure it didn’t happen. But by and large, the massive crowd was disciplined, even though the numbers grew as the evening progressed. 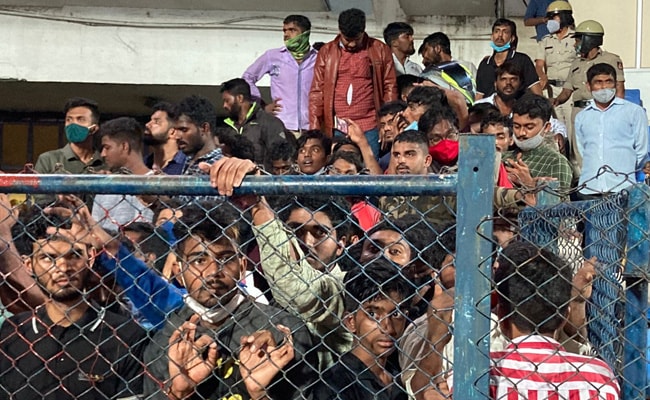 Fans continued coming to the stadium on Saturday to pay their respects to Puneeth Rajkumar.

Images of the casket and those coming to pay their respects were projected onto a big screen at the stadium. Grief and disbelief on the face of the mourners – larger than life.

We left Kanteerava stadium after 9 pm. Fans were still flooding in. They would continue to pour in the whole of Saturday. Saying goodbye to their beloved Appu.