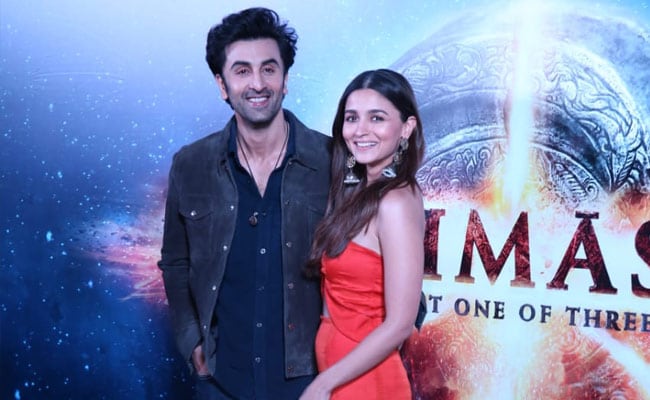 Brahmastra – Ranbir Kapoor and Alia Bhatt at the poster launch.

Leave it to Alia Bhatt and Ranbir Kapoor to make any event fun-filled, yet mushy at the same time. On Tuesday, the couple unveiled the motion poster of their first film together titled Brahmastra at a fan event in New Delhi. The actors, along with director Ayan Mukerji, were asking each other questions on behalf of their fans at the event when Ranbir asked Alia about the ‘R’ factor because of which she has been trending for the past few days – Alia was asked if ‘R’ is a “lucky factor” for her at the trailer launch event of her new film RRR a few days ago (more on that later). “Alia, I have been hearing this, what is your relation with this alphabet R? What is R? Why do people keep asking you about R?” Ranbir Kapoor asked his girlfriend as she shyly turned towards the crows and started laughing.

Her reply is adorable as she is. She said: “Truth ye hai ki R meri life ka sabse bada” and paused for a bit before smiling and continuing: “No 8 hai.” Aww. For the uninitiated, 8 is Ranbir Kapoor’s football jersey number and also his number of choice, in general. The couple’s adorable banter didn’t end there. It was now Alia’s turn to pull Ranbir’s leg. She asked him: “What does A mean to you?” to which he replied: “A means Amitabh Bachchan (Ranbir and Alia’s co-star in Brahmastra)” and then hilariously teased Alia Bhatt by adding: “A means Ayan Mukerji,” without taking her name. The couple then called director Ayan Mukerji on stage.

A few days ago, when Alia Bhatt was attending the trailer launch of SS Rajamouli’s RRR with Jr NTR and Ajay Devgn, she was asked by a reporter if the alphabet R, which is “trending” these because of the film RRR, is a “lucky factor” for her, hinting at Ranbir Kapoor. The actress had said: “I am stumped. Mere paas jawab nahi hai…I am trying to be intelligent. I don’t have a good answer. ‘R’ is a lovely alphabet, but so is he.”

Here’s the video of the actress from RRR trailer launch:

In Brahmastra, Ranbir Kapoor plays the protagonist Shiva who identifies his super power and sets on a journey to save the universe from Brahmastra. The film is set in contemporary India, where a secret society known as the Brahmansh have guarded Astras that were created in ancient India thousands of years ago. One of them, the Brahmastra, is now waking up and it threatens to destroy the universe. Now, the responsibility falls on Shiva’s shoulders to identify the great power within him and protect the universe. Alia Bhatt plays the role of Shiva’s love interest in the film.

Brahmastra is a fantasy trilogy produced by Karan Johar’s Dharma Productions. The film will release on September 9 next year. It also stars Nagarjuna, Amitabh Bachchan, Mouni Roy and Dimple Kapadia in key roles.