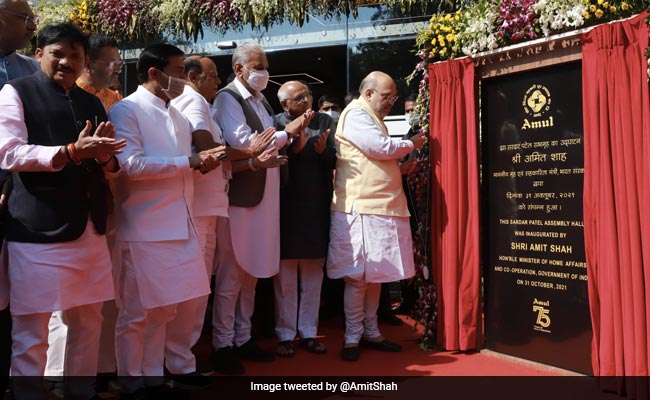 Union Home and Cooperation Minister Amit Shah today said the cooperative sector has a potential to turn India into a USD 5 trillion economy and will also prove crucial in making the agriculture sector self-reliant.

He also stressed the need to implement the cooperative model, which is behind the success of milk giant Amul, to uplift agriculture and its allied sectors.

“As we can see today, Lal Bahadur Shastri’s dream of white revolution is getting realised. But time has come to see beyond this (milk processing). We need to implement this cooperative model to uplift sectors like agriculture and animal husbandry,” Mr Shah said.

“The cooperative model will prove crucial in making agriculture ‘atmanirbhar’ (self-reliant),” he said.

Mr Shah was speaking at an event here organised to mark the completion of 75 years of Amul, which was started in 1946 as a cooperative movement in Anand with the guidance of Sardar Vallabhbhai Patel and cooperative leader Tribhuvandas Patel, the founder of Kheda District Co-operative Milk Producers’ Union, popularly knowns as Amul Dairy.

At present, Amul Dairy, along with 17 other district cooperative unions, are part of the umbrella body the Gujarat Cooperative Milk Marketing Federation, which sells its dairy products under the brand name ”Amul”. There are around 36 lakh farmer families in Gujarat who are associated with Amul.

“Do not limit yourself to 36 lakh. Today, many farmers have turned to organic farming, but they do not have any platform to sell those organic farm produce in India and the world. Can cooperative organisations like Amul help them in doing it? Time has come to think on those lines. This will also increase the farmers’ income,” Mr Shah said.

“Timely research was not carried out in seeds. Can the cooperative sector take it up? The sector should also take up the task of developing new vegetable varieties. This will ensure that profits reach the farmers, not the private companies. It will also contribute to doubling the farmers’ income,” he added.

“Amul started its journey with the collection of 200 litres of milk in 1946. Today, 3 crore litres of milk is processed daily with the help of around 18,000 cooperative societies across Gujarat. Eighteen district-level dairies and 87 milk processing plants are associated with Amul,” Mr Shah added.

He also said that the Ministry of Cooperation, which was created in July this year with the motto of “Sahkar Se Samriddhi”, was in the process of preparing a charter of the ministry.

Remembering the cooperative movement started by Sardar Patel and Tribhuvandas Patel, which led to the creation of Amul, Mr Shah, without giving any specific context, said, “The purpose of a movement is to find a solution to a problem, not to aggravate it.”

On the occasion, Mr Shah launched a scheme “Dairy Sahakar”, with an outlay of Rs 5,000 crore, wherein the dairy sector would get loans through National Cooperative Development Corporation.

Following his address, Mr Shah visited the Amul Dairy premises and then held a meeting with senior officials of the Gujarat Cooperative Milk Marketing Federation, the state government and the leaders of the cooperative sector leaders there.