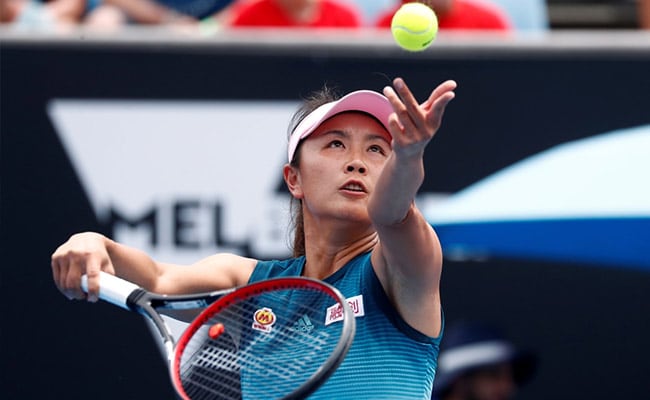 In email, Peng Shuai purportedly claims that her earlier accusations of sexual abuse are “not true”

The boss of women’s tennis has cast doubt on an email posted on China’s media purportedly from tennis star Peng Shuai, saying it “only raises my concerns as to her safety.”

Steve Simon, chairman of the WTA, said in a statement that he had a “hard time believing” the email was written by Peng, who has not been heard from since alleging two weeks ago that a powerful Chinese politician had sexually assaulted her.

Peng, a former Wimbledon and French Open doubles champion, alleged on the Twitter-like Weibo earlier this month that former vice-premier Zhang Gaoli had “forced” her into sex during a long-term on-off relationship.

The claims were quickly scrubbed from social media and she has not been seen since, drawing mounting concern over her wellbeing.

However, state-run CGTN published a screenshot on Twitter of what it said was an email written by Peng to Simon and other WTA officials.

In the email, Peng purportedly claims that her earlier accusations of sexual abuse are “not true” and says she is “resting at home and everything is fine.”

But doubts were quickly flagged about the language used in the purported email from Peng, which Twitter users noted had a cursor visible in the screenshot posted by CGTN.

Simon said he was struggling to believe it was authentic.

“The statement released today by Chinese state media concerning Peng Shuai only raises my concerns as to her safety and whereabouts,” Simon wrote in a statement.

“I have a hard time believing that Peng Shuai actually wrote the email we received or believes what is being attributed to her,” he added.

He said he had been repeatedly trying to reach her via numerous forms of communication, to no avail.

He called for “independent and verifiable proof that she is safe”.

“Peng Shuai displayed incredible courage in describing an allegation of sexual assault against a former top official in the Chinese government,” said Simon.

“Her allegation of sexual assault must be respected, investigated with full transparency and without censorship.

“The voices of women need to be heard and respected, not censored nor dictated to.”

China has kept silent over growing concern for the tennis star, whose claims marked the first time it’s fledgling #MeToo movement has struck at the top echelons of the ruling Communist Party.

But Beijing has previously faced allegations of using forced confessions on state media, with British regulators revoking CGTN’s licence for failing to comply with fairness and privacy rules.

“The Chinese government has a long history of arbitrarily detaining people involved in controversial cases, controlling their ability to speak freely, and making them give forced statements,” he said in a statement.

Nee called for Beijing to prove that she has not been detained.

‘Power of the state’

Mareike Ohlberg of the German Marshall Fund wrote on Twitter that these types of messages are “not meant to convince people but to intimidate and demonstrate the power of the state.”

The message from Beijing is clearly: “‘We are telling you that she is fine, and who are you to say otherwise?'”, she wrote.

On November 2, Peng wrote on social media that Zhang — who is in his seventies — “forced” her into sex and said they had an on-off relationship lasting several years.

The post appeared to have been deleted quickly, however, sparking swift accusations from critics of Beijing of online censorship.

Four-time Grand Slam champion Naomi Osaka said Wednesday that she was in “shock” about the case, with Novak Djokovic and numerous other players in recent days saying they were deeply worried about her.

American player Jessica Pegula tweeted Thursday that she hoped the WTA “continues to show what we stand for as players.”

“I hope more people, not just tennis players, shed some light on this deeply concerning situation,” she wrote.

China’s national tennis association has not responded to AFP requests for comment.