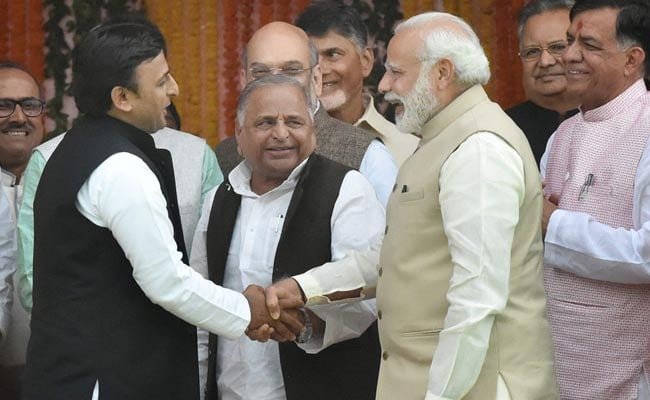 PM Modi criticised his opponents a day before Uttar Pradesh votes in Phase 1.

Prime Minister Narendra Modi on Wednesday made a scathing attack on “dynastic politics” saying “it is a big threat and biggest enemy of democracy” and severely compromises on the talent coming into a political party.

In an interview with news agency ANI, the Prime Minister elaborated on his “fake Samajwadi” jibe at Samajwadi Party in poll-bound Uttar Pradesh and said these parties were concerned about “parivarvad”.

PM Modi said he had received a letter in the past stating that in Samajwadi Party in Uttar Pradesh there were 45 people from the family who held various positions.

The Prime Minister said the government was focusing on the welfare of people and the BJP has a view that “government has no business to be in business”.

“If you listen to our economic principles since the days of Jan Sangh, we have faith in the people, on their capabilities and the government policies should give them opportunities. We are making such policies that they get the maximum opportunity. This is our view that government has no business to do business. How does it connect with socialism? This is against socialism,” he said.

The Prime Minister was answering a query about the economic philosophy of BJP and if the party had turned socialist in its views due to large welfare programmes for the poor and other sections.

The Prime Minister referred to socialist leaders Ram Manhor Lohia and George Fernandes and asked if they ever laid thrust on their families. He said Bihar Chief Minister Nitish Kumar, an ally of BJP at the Centre and in Bihar, is also a socialist leader.

“I am for the society. When I say fake socialism, it is ‘parivarvad’. Do you see Lohia’s family anywhere, he was a socialist; do you see the family of George Fernandes, he was also a Samajwadi. Nitish Babu, he is working with us, he is also a socialist. Do you see his family?” he asked.

Taking a jibe at Samajwadi Party headed by Akhilesh Yadav, he said they laid thrust on “my family”.

“Someone sent me a letter once that in Samajwadi Pary in Uttar Pradesh there were 45 people from the family who held some positions. Someone else told me all those of around 25 years in age got the opportunity to contest elections. Is this dynastic politics is a threat for democracy?” he asked.

Answering a query about allegations against BJP that it also has dynastic leaders, the Prime Minister said there is a difference between one or two people from a family getting tickets and winning elections and all important political positions in a party going to a particular family in the party.

He said in dynastic parties positions like the president, parliamentary board chief are held by a person and if the father is not there for some reason, the son replaces him.

“The family runs the party, this is a big danger to democracy. The family-run parties are the biggest enemy of democracy as it negates the basic norms. Their goal is to save family whether there is any benefit of the country” he said.

“The biggest casualty in parties which save a family is talent. The democratisation of political parties is important. The dynastic politics stops youth from entering politics,” he said.

PM Modi said if a young person does not want to join the BJP, he does not have the option to go anywhere due to dynastic politics.

“He (youth) feels he will be used for some time and then dumped. He feels that if I work for them I will go along and if I work for the country, I will not survive in politics. Youth are getting scared to enter public life,” he said.

PM Modi said BJP is growing and the youth are joining it because it is functioning in a democratic manner.