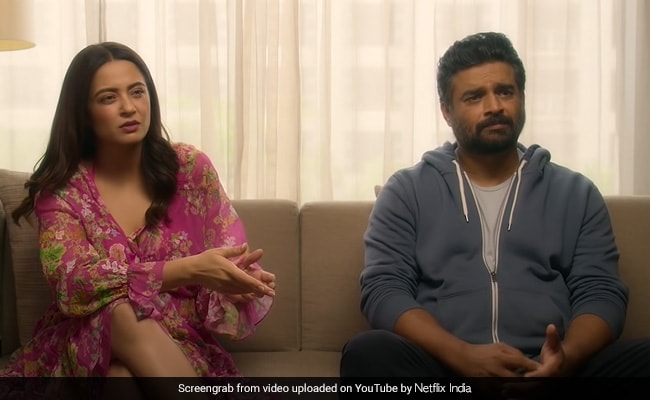 Decoupled Review: A still from the series. (Image courtesy: YouTube )

A bickering married couple, neither Bergmanesque nor Baumbachesque, navigate mounting acrimony and prepare for divorce in Decoupled, a Netflix series produced by Bombay Fables and Vikramaditya Motwane’s Andolan. Unfortunately, the show is a tad like a moribund marriage. It drifts and disintegrates.

Decoupled is fatuous and vacuous by turns. It has no chance of ever being spoken of in the same breath as the long line of wonderful films that have (think Scenes from a Marriage, Marriage Story, Shoot the Moon, A Separation, Kramer vs. Kramer and An Unmarried Woman, et al) spotlighted divorce and its consequences.

The Hardik Mehta-helmed series, created and written by Manu Joseph, is an empty shell of a tale. It skims the surface of a relationship gone kaput under the weight of innate incompatibility and unmet expectations. What is the big deal?

Decoupled is akin to a long sentence that meanders until it finds a paragraph to disappear into and is then reduced to an insignificant fraction of a monotonous, circumambulatory chapter. To cut the long sentence short, a man and his wife realise that they aren’t made for each other and, with their marital liaison hitting choppy waters, they are determined to make their separation an even steeper mountain than their marriage.

The wit is weightless and the ‘battle of the sexes’ truths the series seeks to articulate are anything but illuminating. There isn’t much percentage in swimming in shallow waters, is there?

The affluent Gurgaon couple decide to go their own ways but do not know how to break the news to their 12-year-old daughter and to the woman’s parents in Mumbai. Their primary concern is to insulate their daughter but they also debate the timing of the announcement of their decoupling, of the change of the woman’s Facebook relationship status and of the moves that they must make to look beyond the marriage.

The man, Arya Iyer (R. Madhavan), is a pulp fiction writer forever playing catch-up with Chetan Bhagat (who, as himself, pops up at regular intervals to show the protagonist his place in the popularity pecking order).

Decoupled presents “the pecking order”, like a lot else in the series, in drably literal terms. The envious Arya picks Bhagat’s book off the top perch on a bestsellers rack and replaces it with his own book not once but twice – once in a Gurgaon bookstore, and then at the Delhi airport. He is caught in the act on the second occasion by his rival himself, who says something about Arya being an alumnus of BITS Pilani and, therefore, not in his league.

Arya’s estranged wife, Shruti Sharma Iyer (Surveen Chawla), is an entrepreneur looking for a fresh fund infusion in her venture capital firm. Her marriage has been on the rocks for three years, but she continues to live in the same house as Arya to conceal the truth from their daughter Rohini (Arista Mehta). Shruti woos a Korean tech billionaire (Darren Eric Scott) to boot because it is good for business.

“You are such a disaster,” Shruti shrieks after Arya is nearly assaulted by a bunch of villagers for uttering a four-letter word. He indeed is a disaster. Arya is an extremely unlikeable guy all right, but that isn’t what is wrong with the character. Neither is R. Madhavan’s performance to blame for how the role he plays turns out. Arya Iyer, as a hero of a marital distress drama, simply isn’t convincing.

Granted that Decoupled is a flippant satire and is permitted a few liberties with the way it etches out one of the two lead characters. But was it necessary to turn Arya Iyer into a caricature – a gentleman without a single gentle bone in his body? He invites trouble for himself, be it from a CISF jawan at an airport gate, a man offering namaaz in a prayer room in the terminal building, his pa-in-law (Akash Khurana) or a group of women he mistakes for transgenders in ways that strain credulity.

In contrast, Shruti, who, mercifully, is neither victim nor villain, is a woman who pulls no punches as she aggressively paints her ex-husband-to-be into a corner. Yet, she does not fully evolve into a character easy to be invested in and enthused by. She seems to be merely going through the motions – we cease to care one way or the other – as the couple deal with the factors responsible for the marriage running aground.

With the two principal players shorn of the power to pull us into the trials and tribulations engendered by their failed marriage and impending divorce, Decoupled, despite the whip-smart pivotal performances by Madhavan and Surveen Chawla, a noteworthy background score from Rachita Arora and unblemished camerawork by Piyush Puty, never rises above the ordinary.

Arya and Shruti are surrounded by a slew of stereotypes – a ‘poverty’ economist (Mir Afsar Ali) who, you’ve guessed it, is Bengali and swears by Amartya Sen, a ‘festival’ filmmaker (Aseem Hattangady) who salivates at the prospect of directing a show for Netflix, a flight attendant (Sonia Rathee) who is in an unseemly haste to jump into bed with Arya, an ex-girlfriend (Freisha Bomanbehram) whose hips do not lie and a life coach (Puja Sarup) who counsels Shruti on how to make the best of a bad deal.

Completing the picture is Guru Agni (Atul Kumar), a one-time CEO of a grocery start-up who is now a savant with female followers seeking fulfilment. He holds forth on orgasm and ovulation with the acuity of an edit page column by Chetan Bhagat.

Decoupled seeks to turn everything into a casual joke – liberal thought, anti-intellectualism, climate activism, Islamophobia, the plight of migrant labourers, the anguish of refugees and even a woman who has put on weight around the waist, over-enthusiastic waiters and a sweaty driver (when talk hinges on the class divide, can Parasite be far behind?).

It isn’t much fun watching (through a largely male, privileged gaze) messed-up middle-aged men who have sex on their minds because they probably do not get much action and who arrogate to themselves the task of determining not only what women want but also what they ought to want. But that is what Decoupled offers despite the many women, including sundry mistreated housemaids, who people the story.

Take one example. Arya, in the middle of a conversation with a streaming platform executive (Dilnaz Irani) at an upscale Gurgaon club, thinks he has the right to poke fun at the woman’s urgent need to visit the ladies’ room. “I know exactly the kind of effect a seven-star toilet has on a woman… it is like reuniting a refugee with his homeland,” he says. No justice here for women, refugees and those born on the wrong side of the tracks.

That Decoupled, built primarily around boys’ locker-room chit-chat, is devoid of depth and is riddled with deliberate dissonances does not lessen all the insensitivity it proudly flaunts.