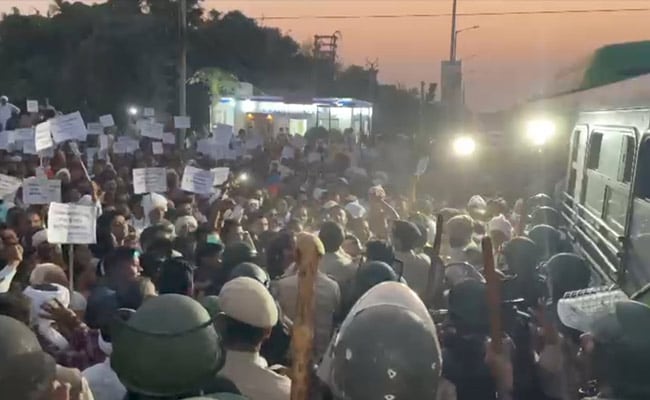 To prevent any situation that may spark unrest at the farmers’ agitation site in Singhu, Delhi Police today stopped a group of protesters headed that way to demand compensation for the murder of Lakhbir Singh, whose mutilated body was found in the area earlier this month.

The body of Singh, a Dalit labourer from Punjab, was found at the protest site on October 15. Reports claim that the 35-year-old man was attacked for allegedly desecrating Sikh holy book Guru Granth Sahib. Four Nihangs have been arrested in connection with the killing.

The protesters, led by leaders of an outfit Hind Mazdoor Kisan Samiti and including Singh’s family members, were stopped by police at Narela near Delhi-Haryana border.

Visuals show the protesters trying to force their way to the farmers’ protest site as the policemen stop them. Police reportedly carried out lathicharge to bring the situation under control. Barricades have now been put in place and additional personnel deployed to prevent any flare-up.

The protesters, who carried placards that read “Stop terror in the garb of movement”, were demanding that they be allowed to stage a sit-in at the Singhu border, in a counter to the protest by farmers against the centre’s farm laws brought last year. They demanded that the Punjab government pay compensation for Singh’s murder.

The Samyukt Kisan Morcha — the united front of farmer organisations protesting against the farm laws — has unequivocally distanced itself from the murder and said they have no connection with the Nihangs.

Incidentally, the Hind Mazdoor Kisan Samiti had backed the farm laws last year and had taken out rallies in their support.

Earlier this week, Singh’s family members met Vijay Sampla, chairman of National Commission For Scheduled Castes, and sought justice. The commission has said that it will ensure that those guilty are punished under the SC/ST (Prevention of Atrocities) Act and that the labourer’s family receives adequate compensation.