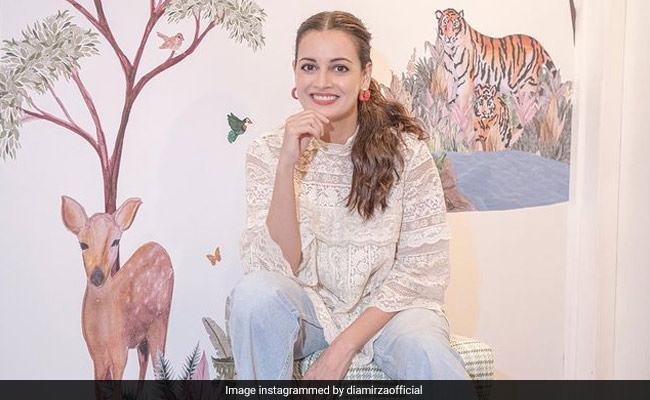 Dia Mirza has always been vocal about her love for the planet and has actively backed causes supporting her vision to make human habits more sustainable. In fact, ever since Dia Mirza’s win at the Miss Asia Pacific pageant, the actress has been associated with campaigns to make the world a better place. And, it looks like the new mother is ready to inculcate the same belief system in her son, Avyaan Azaad Rekhi. Taking the first step of sorts towards this, Dia Mirza has chosen a jungle-themed wall art for her son’s nursery. With tigers, trees and deer, the wall art seems a befitting addition to the home of the nature-loving family.

It comes as no surprise that the little one’s room is Dia Mirza’s new favourite place. Sharing images of herself seated on a chair in front of the wall art, Dia wrote, “My favourite place in the world these days is Avyaan’s nursery. Nature love reflecting with our wall art…”

Reacting to the image, Shabana Azmi, who is a close friend of Dia Mirza said, “Avyaan ki tasveeron se to aisa lagta hai ke he is a drop of Vaibhav ! Us mein aapka koi dakhal nahin hai (From Avyaan’s pictures, it seems that he is a drop of Vaibhav. There doesn’t seem to be any meddling of yours in him).” Shabana Azmi is referring to Vaibhav Rekhi, Dia’s husband. Dia Mirza replied to the funny comment with a laughter and heart emoji.

Singer and composer, Vishal Dadlani wrote, “That’s gorgeous. Hugs to all of you. Gotta come visit soon to meet the little toughie!” Bipasha Basu replied to the post with heart-eye emoji.

And this is not the only jungle-themed element in Avyaan’s room. Recently, Dia Mirza also shared a video of the toddler’s feet while he is resting on a tiger and dragonfly printed blanket. Sharing the adorable clip, Dia wrote, “Hakuna Matata.”

Last month, Dia Mirza shared an image with her baby and wrote, “Our story has only just begun Avyaan 15.09.2021.” In a lengthy post, she thanked doctors and nurses in the NICU, for looking after her son soon after his birth. She wrote, “Avyaan, you have taught us humility, grace, and the power of prayer. Stay blessed baby. You complete us in every way.”

She also added, “All our family and friends this time would not have been half as comforting without your strength and prayers. Thank YOU all. You know who you are.”

Dia Mirza and husband Vaibhav Rekhi welcomed their son in May this year but announced his birth a few months later. In a post, Dia said, “Our heartbeat, our son Avyaan Azaad Rekhi was born on May 14th. Having arrived early, our little miracle has since then been cared for by tireless nurses and doctors in the Neonatal ICU.”

Dia Mirza married businessman Vaibhav Rekhi in February this year. She was previously married to Sahil Sangha. She is best known for her work in films such as Rehnaa Hai Terre Dil Mein, Lage Raho Munna Bhai, Sanju, and Thappad.