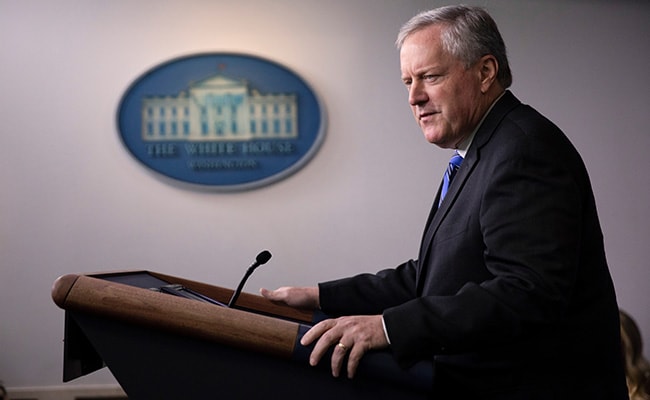 US lawmakers voted Tuesday to recommend criminal contempt charges against Donald Trump’s former top aide Mark Meadows for refusing to testify before the congressional panel investigating the January 6 assault on the Capitol.

The rebuke from the House of Representatives moves the ultra-conservative ex-congressman a step closer to becoming the first White House chief of staff to be prosecuted after leaving the post since H.R. Haldeman in the Watergate scandal nearly 50 years ago.

“We’ve given Mark Meadows every opportunity to cooperate. He’s brought this situation on himself,” the House January 6 select committee said in a statement ahead of the vote, which went roughly along party lines, with just two Republicans joining every Democrat to hold Meadows in contempt.

The panel is investigating Trump’s efforts to overturn his defeat in the November 2020 election in the run-up to the Capitol riot — as well as the help he got from Meadows and others.

Meadows, who served in the House for seven years before decamping to Trump’s team in 2020, defied a subpoena requiring him to testify, pointing to an “executive privilege” claim by the Republican former president.

That defense, which is theoretically only available to sitting presidents seeking to keep sensitive conversations with aides private, has already been shot down by a federal appeals court.

The nine-member select committee, which voted Monday to advance the contempt case, says it is seeking answers about text messages and other communications that Meadows has already acknowledged are not privileged.

Investigators say Meadows has given up any right to refuse testimony in any event, as he is promoting a new memoir that includes detailed accounts of January 6 and his conversations with Trump.

He has also spoken numerous times about the attack in primetime appearances on Fox News.

During Monday’s hearing, Cheney read out frantic messages sent to Meadows during the assault from three Fox News hosts, as well as administration officials, lawmakers and the president’s son Donald Trump Jr.

Each begged Meadows — unsuccessfully — to get Trump to call off his supporters and put a stop to the violence.

“We need an Oval Office address. He has to lead now. It has gone too far and gotten out of hand,” Trump Jr told Meadows.

The messages made it clear that, contrary to their efforts since January 6 to downplay the assault, members of the former president’s inner circle were appalled by the violence at the time.

“It’s disappointing and unfortunately not surprising that some of the very same individuals who were willing to warn, condemn and express horror over what happened on January 6 in private were totally silent… or, even worse, were spreading lies and conspiracy theories,” President Joe Biden’s spokeswoman Jen Psaki told reporters.

Cheney described the texts as evidence of Trump’s “supreme dereliction of duty” during three hours of inaction during the assault, when thousands of his supporters stormed the Capitol to stop the certification of Biden’s election victory.

In a further sign of the net tightening on figures accused of involvement in the Capitol assault, the Democratic attorney general for the US capital said Tuesday he was suing the Proud Boys and Oath Keepers, blaming the far-right groups for the violence.

The Meadows case is a federal issue, however, and the 62-year-old Florida native will have to sweat until the Justice Department decides whether prosecutors will take up the House referral.

The department charged former White House strategist Steve Bannon with criminal contempt of Congress less than a month after the House voted to refer him.

The Meadows decision may prove less straightforward than the case of Bannon, who was not working for the Trump administration at the time of the riot.

Meadows’ lawyer George Terwilliger said in a statement his client’s refusal to cooperate did not amount to non-cooperation, but rather an effort to “honor” Trump’s rejected privilege claims.