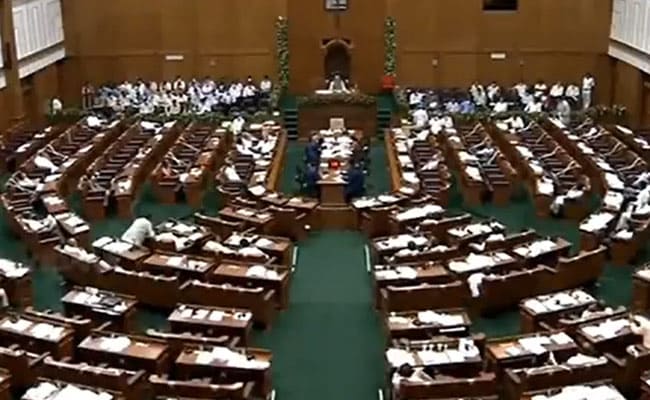 The remark drew guffaws from the members of the Assembly

A senior Congress leader from Karnataka was heard making an outrageous and sexist comment in the state Assembly today, putting rape on par with an unwilling acquiescence to a discussion on farmers’ issues.

“There is a saying that when rape is inevitable, lie down and enjoy it. That is exactly the position which you are in,” KR Ramesh Kumar, the former Speaker of the Karnataka Assembly said today, drawing guffaws from the members including his successor Vishweshwara Hegde Kageri.

The Congress member’s comment came when the MLAs demanded time from the Speaker to discuss farmers’ issues in the Assembly.

The Speaker questioned how the session can be conducted if time was allotted to everyone. Then, in a note of resignation, Vishweshwara Hegde Kageri added: “Whatever you decide – I will say yes. What I am thinking is that let us enjoy the situation. I can’t control or regulate the system. My concern is about the business of the house, it has also to be covered”.

‘There is a saying, When rape is inevitable, lie down and enjoy it’: You would not believe an ex-Speaker & Congress MLA says this inside the #KarnatakaAssembly and Speaker laughs it off … No one objects and it is business as usual @ndtv@ndtvindia#OutrageousRapeCommentpic.twitter.com/n8oJ8itVDY

To this, Ramesh Kumar made the offensive comparison, and the members broke into laughter.

Karnataka has a high crime rate against women. Data from the Karnataka State Police — reported during the rape at Mysuru’s Chamundi hills in August, which evoked shock and outrage in the state — showed 1,168 rape cases were reported across the state between January 2019 and May 2021.

This is an average of at least one rape a day and 22 of them were gang-rapes.

After the Chamundi hills rape, the state home minister had drawn huge criticism with his regressive comment that the woman and her male friend should not have gone to the deserted spot. Araga Jnanendra also added that the opposition Congress was trying to ”rape” him by targetting him over the incident.

The minister had to withdraw his comments after a huge row.