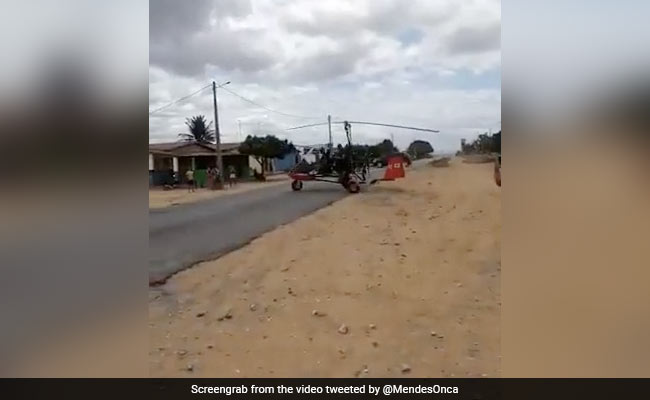 A video went viral with claims that a Brazil man flew a helicopter he made with old car parts.

A man from Brazil is going viral online for building a helicopter out of old car parts. Last week, several media websites reported that Genesis Gomes took a little over a year to build an aircraft that actually flies – and all he used for it was spare parts from old vehicles and other things he found lying around the house. A video of him taking flight stunned the Internet, racking up nearly 2 million views on Twitter.

However, according to local news website G1 Globo, Mr Gomes did not take flight in his homemade helicopter. The video which went viral online was actually filmed at an aviation event in the city of Paraiba. Watch the video below:

According to the report, Mr Gomes, a resident of the city of Joao Dias, has been an aviation enthusiast since childhood. He did build an aircraft using an engine from a Volkswagen Beetle, along with other motorcycle, truck, car and bicycle parts – but has not been successful in making it fly yet.

Footage of him flying a helicopter was filmed at an aviation event where he was invited to show off his creation. When he flew a different aircraft at the event, it went viral with claims that Mr Gomes had taken flight in his homemade aircraft.

Mr Gomes has shared images of his creation on his Instagram page. It is clear that his own aircraft is different from the one he flew – observe the difference in colour between the two.

But the aviation enthusiast has not given up – he is hopeful that he will be able to fly his aircraft with some adjustments.

“Before this plane I had already made the mini-helicopter, a delta wing without an engine and one with an engine. But they didn’t work. But I’m going to assemble this wing again and I want to fly”, he said.