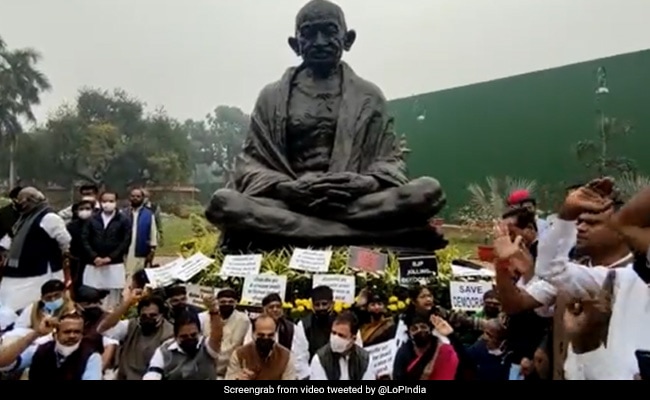 The opposition has been holding protests over the suspension issue since the Winter Session started.

The back-channel talks to resolve the ongoing impasse in parliament may hit a wall, a tweet by Trinamool’s Derek O’Brien has suggested. The opposition, he indicated, has no intention of budging from its demand of the revocation of suspension of 12 MPs who were penalized for “unruly behaviour”.

Sources said on Friday, Rajya Sabha chairman Venkaiah Naidu had asked the opposition and the government to meet and back channel talks were on to bring about an understanding on the issue  that has stymied the Winter Session since it started on November 29.

The opposition will meet tomorrow to decide on their stance.

Today, Mr O’Brien, who is the Trinamool’s leader in the Rajya Sabha, tweeted:

Monday morning STUNT from a Govt. who do not want #Parliament to function.

Govt calls leaders of the 4 Oppn parties whose 12 RS MPs have been arbitrarily suspended.

Govt leaves other 10 Oppn parties out.

Mr O’Brien’s tweet also indicated that the Trinamool is ready to collaborate with the Congress on this issue, despite their growing differences. Last week, the Trinamool’s absence was noted in the opposition strategy session called by Sonia Gandhi to take the matter forward. Besides the Congress, five opposition parties were at the meeting — Sharad Pawar’s Nationalist Congress Party, the DMK, the Shiv Sena, CPM and the National Conference. No reason was cited by either side for Trinamool’s absence.

Meanwhile, the Leader of Opposition in the Rajya Sabha Mallikarjuna Kharge has also written to the Parliamentary Affairs Minister over an invitation to four Opposition parties.

But the opposition has been unrelenting on the issue, which became the big flashpoint in the Winter Session. Neither house has been able to function smoothly, with opposition members holding regular protest meets. Among those suspended are six MPs from the Congress, two each from Trinamool Congress and Shiv Sena, and one each from CPI and CPM.

The government, which had accepted the opposition’s point that the MPs’ unruly behavior took place in the last session, meaning they cannot be suspended in this session under the Rajya Sabha rules.

“They (however) want the suspended members to apologize one by one in the House but they are not going to do anything of that sort,” Congress’s Mallikarjun Kharge has said.