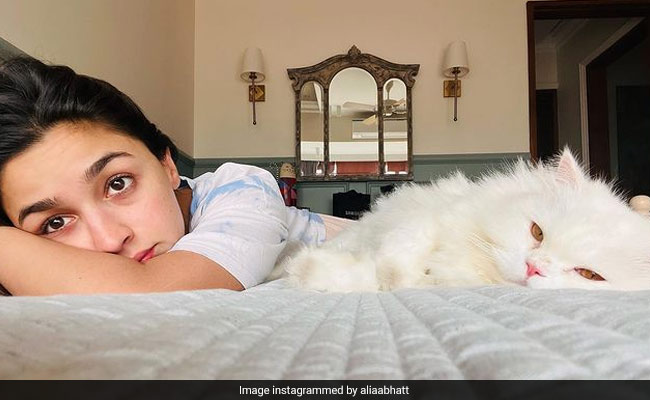 Alia Bhatt is a delight to follow on social media. From fun updates about her life and work to important social causes, Alia Bhatt uses her reach to speak about various topics. But on a lazy Monday morning, she like the rest of us cannot bear to get out of bed. And, who is giving her company as she lounges in her pyjamas? Well, it is none other than her adorable pet cat, Edward. Sharing the photo in which both Alia and Edward are staring lazily into the camera, the actress wrote, “IRL (in real life),” along with a monkey emoji.

Alia Bhatt’s pet often makes an appearance on her Instagram feed. A few months ago, the actress shared a photo in which she is hugging her furry friend, Edward the cat. The caption of the image sums up her bond with her pet. “Eternal,” Alia Bhatt said in the caption.

On another occasion, Alia Bhatt is seen engaging in an adorable staring contest with fluffy little Edward. In the caption, she wrote, “My muse,” with a heart emoji.

Given Alia Bhatt’s choc-a-block schedule, we think that she truly deserves a lazy Monday with Edward cuddling by her side. The actress has been on a promotion spree with her film RRR. The movie is directed by SS Rajamouli and has the actress sharing screen space with Ram Charan Tej, Jr NTR, and Ajay Devgn. It is slated to release on January 7, 2022.

In addition to RRR, Alia Bhatt was also seen promoting her film Brahmastra, the motion poster of which was released recently. The Ranbir Kapoor-starrer is scheduled to release on September 9, 2022, and features Amitabh Bachchan, Mouni Roy and Nagarjuna in important roles.