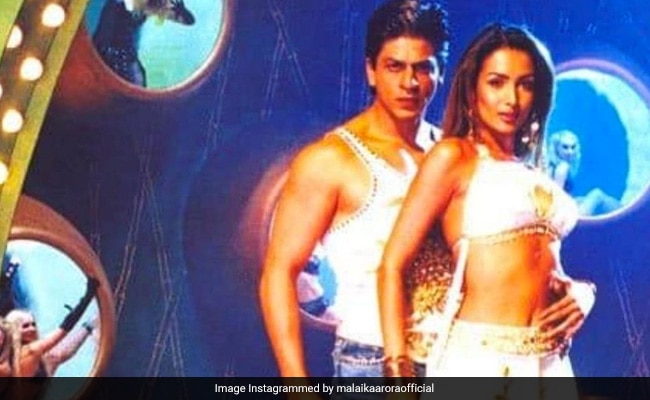 Malaika and SRK in a throwback. (courtesy: malaikaaroraofficial)

It’s Shah Rukh Khan’s 56th birthday today and the Internet is bombarded with greetings for the actor. Malaika Arora, who is a self-confessed SRK “fan girl,” shared throwbacks from the songs in which she featured with Shah Rukh Khan and wrote an extensive note along with it. Malaika Arora and Shah Rukh Khan featured together in hit numbers like Chaiyya Chaiyya from Dil Se.. and Kaal Dhamaal from Kaal. She was also one of the many stars to feature in Deewangi Deewangi from SRK’s film Om Shanti Om. “23 years back was a fan girl and I continue to be one,” wrote Malaika Arora.

The actress added in her note, “Seeing you through all these years and how you carry yourself has not just been a pleasure but also inspiring. How you strive tirelessly to make everyday and every year better for people around you is beyond amazing. This year… this day is extra special, this day is extra sweet and I hope it always remains that way cos you deserve it all. Now and forever! Happy birthday Shah Rukh Khan.”

In terms of work, Shah Rukh Khan was last seen in 2018 film Zero, co-starring Anushka Sharma and Katrina Kaif. He will next be seen in his much-awaited film Pathan, alongside Deepika Padukone. He has also co-produced Alia Bhatt’s Darlings, which marks her debut as a film producer. He has also backed the standalone film on Bob Biswas, featuring Abhishek Bachchan.

In terms of work, Malaika Arora was last seen as one of the judges in the dance reality show India’s Best Dancer, alongside choreographers Terence Lewis and Geeta Kapur. She currently features as a judge in India’s Next Top Model with Milind Soman and Anusha Dandekar. Malaika Arora is best-known for her dance performances to popular tracks such as Chaiya Chaiya, Munni Badnaam Hui, Anarkali Disco Chali and Hello Hello among many others.