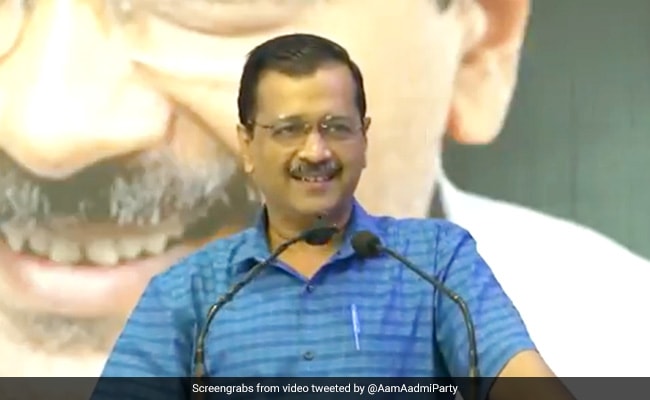 Arvind Kejriwal has promised free religious tours to the people of Goa.

Delhi Chief Mnister Arvind Kejriwal — out to expand his party’s footprint across the nation — said today that his Aam Aadmi Party has established a firm base in Goa, where assembly elections are due next year. Accusing the ruling BJP government of corruption, he said even the coastal state’s former Governor Satyapal Malik had accused the Chief Minister. The Congress, he alleged, is the BJP’s partner in crime.

Mr Kejriwal — whose party lost his deposit for every seat except one in the 2017 polls in Goa — is trying to replicate the Delhi model in the state after AAP’s second sweeping victory in the national capital.

When the question of funds arose, Mr Kejriwal said, “this was answered by Satyapal Malik ji who told how much corruption is there in Goa”.

“Satyapal Malik is a very mature man. He is not a light-hearted man. The Governor has his own system under which he gets a lot of information,” he added.

“Since 1947, it has not happened that any Governor has accused the Chief Minister of his party,” the AAP chief remarked, adding that the BJP is “openly trying to continue corruption”.

Besides unemployment allowance and free electricity, Mr Kejriwal has promised free religious tours to the people of Goa.

“If AAP comes to power, we will arrange for free darshan of Lord Ram in Ayodhya. Christian brothers and sisters will be taken to Velankani and Muslims to Ajmer Sharif. Many people also have faith in Sai Baba, will arrange trips for Shirdi for them,” the AAP chief said, insisting that there is no shortage of funds.

The entry of AAP and Trinamool Congress for next year’s state elections has paved the way for a multi-cornered contest in Goa. At the other end is the BJP. There is also the opposition Congress and the Maharashtrawadi Gomantak Party, which have lost several leaders to the BJP.

The BJP is unfazed at the advent of AAP and Trinamool and said Goa will welcome them as “tourists” who will go away after the election.

The entry of the two parties is expected to cut into the votes of the Congress, which became the single largest party wining 17 of the state’s 40 seats in the 2017 elections but lost to the BJP when it came to government formation.  The BJP – which won 13 seats — formed the government with the help of Independents.