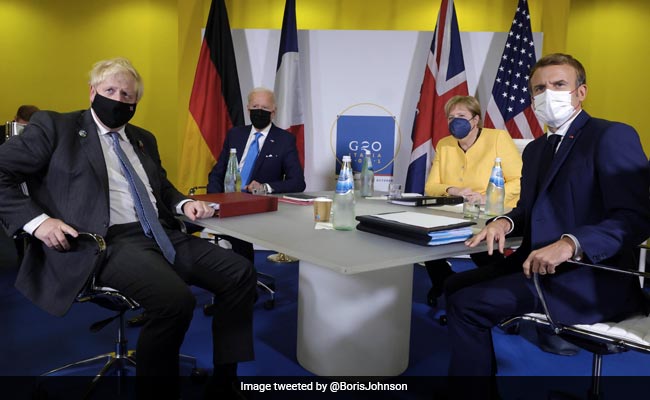 Discussions will “continue tomorrow” between France, the UK and the European Commission.

French President Emmanuel Macron said on Monday that retaliatory measures threatened against Britain over an escalating row about fishing rights would not be implemented at midnight as talks are ongoing.

Discussions will “continue tomorrow” between France, the UK and the European Commission, Macron said on the sidelines of the COP26 summit in Glasgow, ruling out the application of retaliatory measures for the time being because “it’s not while we’re negotiating that we’re going to impose sanctions”.

France had vowed to subject British imports to tighter controls starting from Tuesday in a bitter row over post-Brexit fishing rights.

Macron’s government had said it would prevent British fishermen offloading their catches in French ports over the failure by Britain and the Channel Islands of Jersey and Guernsey to issue dozens of French boats with licences to fish in their waters since Brexit took full effect this year.

The feud has already seen a British trawler detained in a French port and France’s ambassador in London summoned to the Foreign Office for the type of dressing down usually reserved for hostile states not allies.

“The discussion will continue tomorrow,” Macron told journalists in Glasgow on Monday.

Macron said he had “confidence in the British Prime Minister Boris Johnson to take seriously” the French proposals and for the discussions to lead to a “result”.

“For 10 months the results have been too slow, if this new method allows us to have a result, I hope we will give it a chance,” he said.

The latest post-Brexit row between France and Britain comes as Macron continues to fume over London’s involvement in a defence pact with the United States and Australia that cost France a multi-billion-euro submarine deal.

There was no outward sign of tension as Johnson welcomed Macron to the COP26 climate summit, with the two leaders smiling and chatting for several minutes

But in Brussels, officials scrambled behind the scenes to head off a showdown by hosting a meeting of representatives from France, Britain and the Channel islands to try to defuse the row.

A spokeswoman for the European Commission told AFP the meeting aimed for “a swift solution on the outstanding issues.”

With just hours to go before the deadline, both sides were sticking to uncompromising positions, with Britain’s Foreign Secretary Liz Truss threatening to sue France.

“If somebody behaves unfairly in a trade deal you’re entitled to take action against them and seek some compensatory measures. And that is what we will do if the French don’t back down,” told Sky News.

Britain has also threatened to step up inspections of EU fishing vessels.

The head of the regional fisheries committee of France’s northern Hauts-de-France region, Olivier Lepretre said on Monday he feared that fishermen would be turned back from British waters “over the slightest issue.”

If provoked, he said, French fishermen, who have staged protests in Channel ports in recent months, would carry out further action.

“The fishermen will show some muscle, they have to be able to work and fish in British waters as they have done since time immemorial,” he told a press conference.

France says that dozens of French fishermen are waiting for licences to ply waters between six and 12 miles from British shores, and in particular around Jersey.

After talks with Johnson on the sidelines of a G20 summit in Rome on Sunday Macron said the two had agreed to work on “practical and operational measures” but insisted: “The ball is in Britain’s court.”

Johnson however denied that Britain’s position had changed.

A day earlier he had complained to EU chief Ursula von der Leyen over the “completely unjustified” French threats and raised the possibility of invoking the Brexit dispute tool for the first time, drawing the EU into the row.