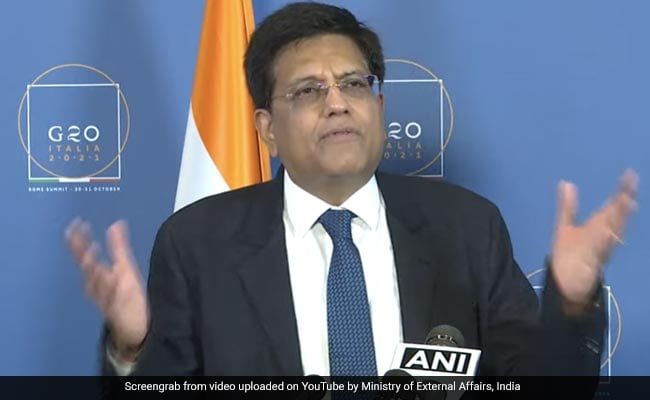 Leaders of the G20, including Prime Minister Narendra Modi, have agreed that the WHO would be strengthened to fast-track the process for emergency use authorisation for COVID-19 vaccines, India’s G20 Sherpa Piyush Goyal said on Sunday.

Briefing the media, Mr Goyal said the leaders adopted the Rome Declaration at the G20 Summit and the communique gives a very strong message under the health section with the countries agreeing that COVID-19 immunization is a global public good.

It was decided that the recognition of Covid vaccines which are deemed to be safe and efficacious by the World Health Organisation (WHO) will be mutually accepted subject to national and privacy laws that the countries may have, Mr Goyal said.

“But more importantly it has been agreed that everybody will help to optimize the processes and procedures of the WHO for vaccine approval and emergency use authorisation, and the WHO will be strengthened so that it can do the recognition of vaccines faster,” he said.

PM Modi had told G20 leaders on Saturday that India is ready to produce over 5 billion Covid vaccine doses by the end of next year to help the world in the fight against the pandemic. He had said it was necessary that the WHO approves Indian vaccines at the earliest.

A technical advisory group of the UN health agency will meet on November 3 to conduct a final “risk-benefit assessment” for Emergency Use Listing of Covaxin. Bharat Biotech’s Covaxin and AstraZeneca and Oxford University’s Covishield are the two widely used vaccines in India.

Mr Goyal said PM Modi’s mantra of sustainable lifestyles was reflected in the G20 declaration on sustainable consumption and responsible production patterns. Livelihoods of small, marginal farmers were among focus areas of India’s discussions at the G20 Summit in Rome, Mr Goyal said.