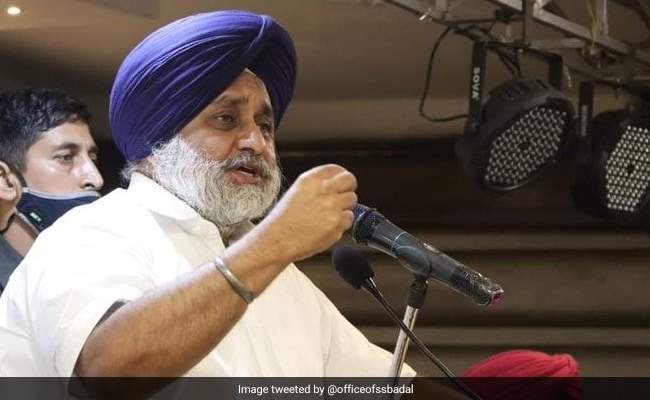 Shiromani Akali Dal (SAD) chief Sukhbir Singh Badal on Monday said that the incident of alleged sacrilege attempt at Golden Temple in Amritsar should not be politicised and demanded culprits to be caught.

Speaking in the press conference here in Fazilka, Punjab, Sukhbir Badal said, “We do not want to do politics, we want culprits to be caught. Since no culprit was caught in the last 5 years, they were emboldened. It’s sad they have formed inquiry committee of the Deputy Chief Minister. A judge should have been on the committee. This shows that they do not want to catch culprits.”

Mr Badal further slammed the Punjab Chief Minister Charanjit Singh Channi and said, “I would like to tell Punjab Chief Minister and Dy CMs to remember the sacrilege incident in our government’s rule, you had said that CM should be jailed, that CM-Dy CM had allowed it. You did politics and didn’t catch the guilty and deliberately spent 5 yrs in defaming Badal family and SAD.”

A man was beaten to death in an altercation by angry devotees after he allegedly attempted to commit sacrilege at the Golden Temple in Amritsar, earlier on December 18.

The incident took place during evening prayers when the man jumped over the metal railing around the Guru Granth Sahib and allegedly attempted to desecrate the Holy Book of the Sikhs with a sword.

Meanwhile, an unidentified man was allegedly beaten to death by locals at Nizampur in Punjab’s Kapurthala district on Sunday for allegedly disrespecting the ‘Nishan Sahib’ at the village Gurudwara.

A video of people beating up the man who allegedly attempted sacrilege with the Nishan Sahib has gone viral on the Internet. He was later handed over to the police but some people reportedly insisted that the man be questioned in front of them and the man was allegedly beaten to death in an ensuing scuffle.