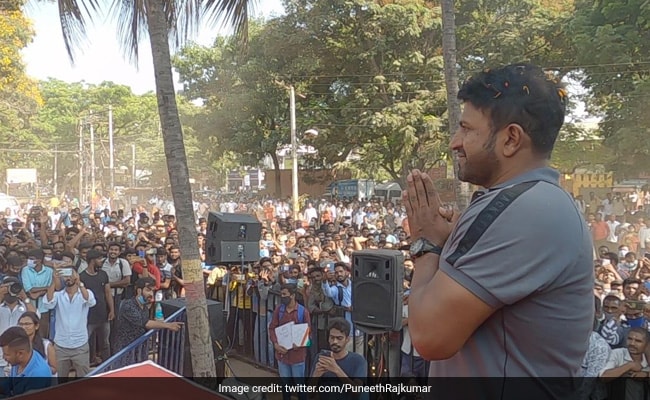 Puneeth Kumar was fondly called “Appu” by his fans

Kannada actor Puneeth Rajkumar died on Friday at the age of 46. Karnataka Chief Minister Basavaraj Bommai and several other politicians paid tributed to the popular actor.

Mr Bommai said that he was deeply saddened and Mr Rajkumar was hugely personal.

“Shocked and deeply saddened as Karnataka’s most loved superstar #PuneetRajkumar is no longer with us. A huge personal loss and one that’s difficult to come to terms with. Praying the almighty gives the Rajkumar family and fans the strength to bear this loss,” he posted on Twitter.

Former Karnataka Chief Minister, Siddaramaiah, said that Mr Rajkumar had won the hearts of Kannadigas through his acting skills and that it was a great loss for Karnataka.

“Deeply shocked by the demise of talented actor #PowerStar #PuneethRajkumar. He had won the hearts of Kannadigas through his great acting skills & his simplicity. His passing away is a great loss for Karnataka,” Siddaramaiah said.

Son of matinee idol Rajkumar, Puneeth is fondly called ”Appu” by his fans. He started his career as a child artist with his father in the early 1980s. ” Raam”, ”Hudugaru”, and ”Anjani Putra” are some of his memorable movies. He was last seen in ”Yuvarathnaa”, which was released early this year.

Tejasvi Surya, BJP leader and member of parliament for Bengaluru South, said that it was hard to believe that the actor was no more.

The actor was taken to Bengaluru’s Vikram Hospital on Friday morning after he complained of chest pain.

“The news of the death of film actor, Yuvaratna Puneet Rajkumar is shocking. I watched Appu starring Prithviraj and rajakumara along with him. Today Karnataka lost yuvaratna,” Mr Devegowda was quoted as saying by ANI.