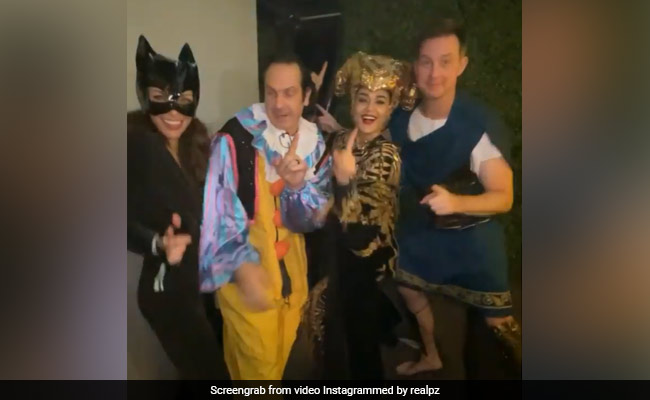 Preity Zinta in a still from the video. (courtesy realpz)

Every time Preity Zinta appears on screen, she makes us giddy with joy. Whether it is her on-screen roles or her social media presence, the actress manages to win her fans over with her dimpled smile and effervescent charm. Now, on the occasion of Halloween, it seems that Preity Zinta has turned into the perfect golden girl as she partied in a black and gold outfit that was a perfect fit for the diva. The highlight of the costume, however, was a golden headgear inspired by a ram and studded with golden jewels. Giving us a sneak peek of her look in a video, Preity Zinta wrote, “Happy Halloween everyone. Here’s to a golden Halloween,” followed by a ghost, spider web, pumpkin, and skull emojis.

In another update, Preity Zinta is seen with her husband Gene Goodenough. In the video, the happy couple and their friends are shaking a leg. Sharing the post, Preity said, “Dancing the night away,” along with hashtags, “Halloween” and “Pati Parmeshwar”.

Before that, Preity Zinta uploaded a loved up post with her Gene Goodenough from the United Arab Emirates. Sharing the image, the Dil Se actress said, “Dubai Nights.”

And, being the cricket enthusiast that she is, Preity Zinta spent Karwa Chauth watching team India play a match in the ongoing T20 World Cup. Sharing a selfie, the actress said, “A sporty Karwa Chauth with my man in blue.”

The actress also shared another photo from the Dubai International Stadium. Preity Zinta wrote in the caption, “All ready to cheer for the boys in blue. All the best to the Indian cricket team.”

Preity Zinta and Gene Goodenough have been married since 2016. While the couple is settled in Los Angeles, Preity Zinta travels to India often for work-related commitments.