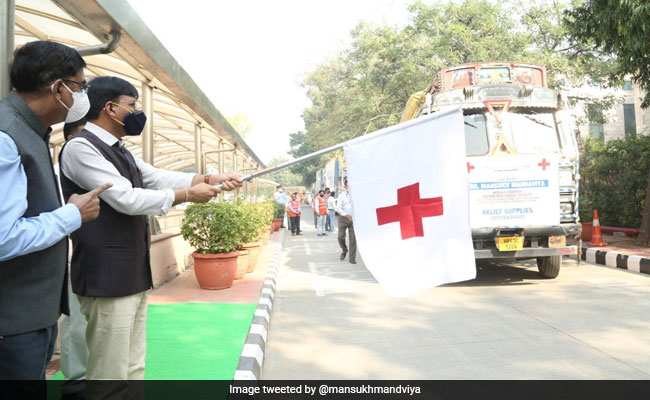 “This will support vulnerable populations in the northern-most UTs for the winter season and provide flood relief to people of Uttarakhand,” Mr Mandaviya said in a tweet.

Flagged off Red Cross trucks for donation of blankets, medicines & other relief material to the people of Jammu, Srinagar, Ladakh & Uttarakhand

This will support vulnerable populations in the northern-most UTs for the winter season & provide flood relief to people of Uttarakhand pic.twitter.com/P8nReSFsyg

The flag-off function was held at Nirman Bhawan, New Delhi.

While flagging off the supplies, Mr Mandaviya said, “Red Cross assists the most vulnerable and needy in times of disasters and other crisis situations.”

He added that people affected by severe flooding are already being assisted by the local Red Cross branches. The national headquarters is supplementing their efforts by sending fresh supplies.

The Union health minister said that prepositioning of relief items is under process for use by vulnerable states. These items consist of among other things about one lakh blankets, one lakh hygiene kits, one lakh tarpaulins and 75,000 kitchen sets.

The Union Health Minister further stated that recent landslides and flash floods in Uttarakhand have severely affected the state.

“To supplement the efforts of the State Government, three truck loads of relief supplies have been sent to Uttarakhand. In addition, Ministry of Health has also sent medicines for the suffering population. Hilly states experience severe cold in the winter months. The blankets are being pre positioned so that in times of any crisis, people affected can be supported immediately”, he added

Heavy rains in the recent past have left scores of people dead in Uttarakhand. Over 300 people were rescued by the National Disaster Response Force (NDRF) from the flood-affected areas of the state.