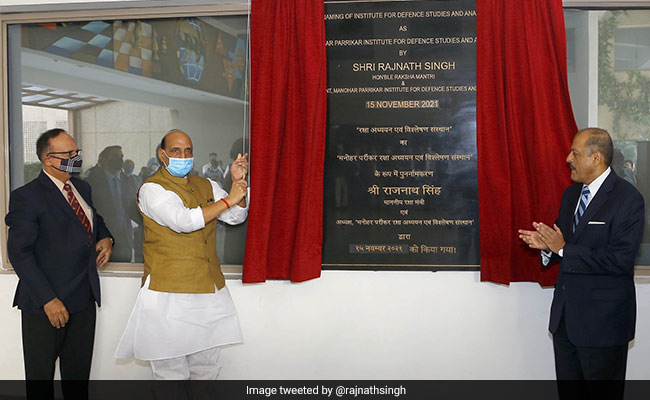 Mr Singh today unveiled a plaque at the Institute for Defence Studies and Analyses in New Delhi to rename the institute after Parrikar.

As per the official release by the Ministry of Defence, the renaming as Manohar Parrikar Institute for Defence Studies and Analyses (MP-IDSA) by the Defence Minister, who is the President of the Institute, follows the unanimous decision by the general body earlier this year to affect the change in the memory of the former Defence Minister.

The renaming coincided with the 57th Foundation Day of the Institute that is celebrated on 11th November every year.

Recalling his long association with him, Rajnath Singh said, “Parrikar ji had a deep understanding of matters related to defence and his insistence on indigenisation and efforts for politico-military synergy made him an invaluable asset. He was a thoughtful leader for our Armed Forces. His leadership in the 2016 counter-terrorist strikes following the Uri incident and the decision of ”One Rank One Pension” taken in the interest of the Armed forces will be long remembered.”

Extending his best wishes to MP-IDSA on its 57th Foundation Day, Rajnath Singh lauded the hard work and determination of the institute which, he said, has emerged as one of the best think-tanks in the field of defence, national security and international relations in the last almost six decades.

He described it as a unique institution, which has brought together the talents in academia & different research areas as well as government departments of many countries.

“The ideas that came out of the brainstorming have helped decision makers in dealing with the challenges of the 21st century. This institute has reached people through its large number of publications. It is constantly striving to carry forward its glorious legacy,” he added.

Mr Singh emphasised on the need to stay more alert and vigilant in view of the fast-changing global security scenario and invisible threats like the COVID-19 pandemic. He termed MP-IDSA as an invaluable treasure that can provide a new direction to the defence and security of the country.

“All of you are studying from traditional warfare to non-contact and hybrid warfare and other concepts of war. But along with comprehensive national security comes high end technological capability, a population of a diverse skill set and national economic strength,” he said.

Rajnath Singh called upon the institute to contemplate more deeply in areas of national security so that it can also be useful in the overall growth of the nation. He exhorted the institute, especially the scholars, to come up with new ideas in the field of research and policy making and contribute towards building a strong and capable India. He extended all possible support from the Government to achieve this objective.

Mr Singh also inaugurated the 100 KW Grid connected rooftop solar power plant on the occasion. The Solar Power Plant project has been set up under the Ministry of New and Renewable Energy’s scheme for promoting solar roof-top plants on government buildings. Since its inception, the solar plant has successfully saved 1,41,540 units, resulting in a saving of over Rs 14 lakh per annum.

Commending the work of the institute towards energy security, he said, the Solar Plant is a testament to the Government’s commitment to promote clean energy for a healthy environment.

The Union Minister also inaugurated an Open Air gym at the institute, terming it as an important initiative. He stressed on strengthening the health and immune system, especially during the pandemic.

“While the number of vaccinations by the Government has crossed 100 crores, the awareness of our own health by the people will make us jointly victorious in the fight against covid-19. We are fully committed towards public health,” he said. Rajnath Singh appreciated the fact that the project is a product of close coordination between MP-IDSA and a local Army station without any additional financial burden.