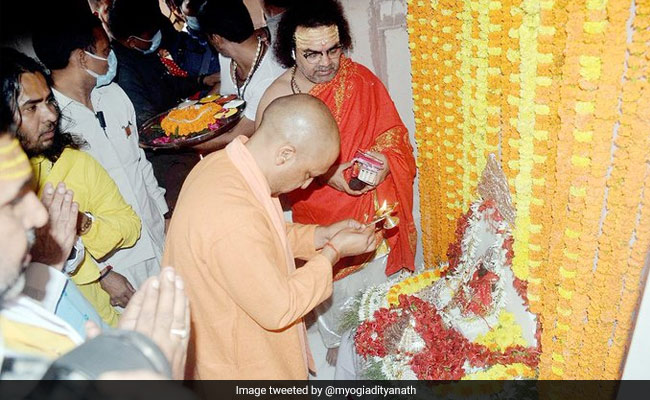 The idol was installed in the north-east corner of the Kashi Vishwanath temple.

An idol of Goddess Annapurna brought back from Canada after 108 years was installed at the Kashi Vishwanath temple in Varanasi on Monday in a ceremony attended by Uttar Pradesh Chief Minister Yogi Adityanath.

The idols of five other deities removed during the reconstruction of the temple were also installed.

The idol of the goddess was taken to the temple in a silver palanquin, shouldered by Mr Adityanath. The procession started from the Kushmanda temple in Durgakund in the morning.

It was installed in the north-east corner of the temple amid chanting of hymns.

The chief minister had arrived in Varanasi on a two-day visit on Sunday night.

He inspected the cleaning and repair of the Shahi drain on the Lahurabir-Maidagin road late in the night and ordered to complete the work on a war-footing.

Mr Adityanath also took stock of the construction of the Kashi Vishwanath temple corridor after paying obeisance at the temple.