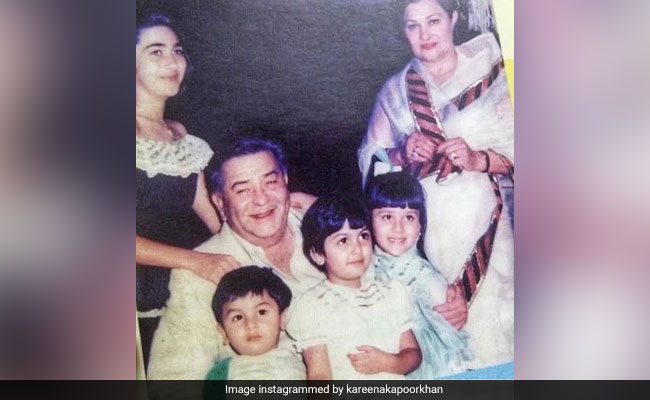 A throwback of Ranbir with Raj Kapoor and family.(courtesy: kareenakapoorkhan)

Bollywood star Ranbir Kapoor on Tuesday said he is “interested” in making a biographical feature film on the life of his grandfather and Hindi cinema veteran Raj Kapoor. The actor, who belongs to the fourth generation of the prestigious Kapoor film family, was speaking at a panel discussion following the launch of the book “Raj Kapoor: The Master At Work” in the capital. Published by Bloomsbury India, the book is written by filmmaker Rahul Rawail, who served as an assistant director to Raj Kapoor on films like “Bobby”, as told to Pranika Sharma.

Asked what he would say to his grandfather if he were alive, Ranbir Kapoor said, “I would like to have a drink with him, just chat with him about life.” “I’m very much interested in making a biopic on his life. There are so many things which were off the record probably when Rahul uncle was working with him. I know Rahul uncle has many stories which he did not put in the book,” he said.

Regarded as the Showman of Hindi Cinema, Raj Kapoor was an actor, a director and producer known for films like “Aag”, “Shree 420”, “Mera Naam Joker”, “Ram Teri Ganga Maili”, among others. A recipient of Padma Bhushan and the Dadasaheb Phalke Award, the legendary filmmaker died in 1988 at the age of 63.

Rawail, who was friends with his mentor’s younger sons Rishi Kapoor and Rajiv Kapoor, said he would like to write another book in which he would talk about “all the three sons (of Raj Kapoor)”.

While Rishi Kapoor died in April 2020 after a two-year battle with cancer, Rajiv Kapoor died following a heart attack in February this year.

“I would write a book called ‘Kapoor and Sons’,” the director said in a reference to Rishi Kapoor’s 2016 film of the same name.

Raj Kapoor’s eldest son, veteran actor-director Randhir Kapoor, who was also present at the book launch, said cinema was the only thing that mattered to his father.

“We didn’t matter to him actually. He only saw us grow,” he quipped.

“He ate, he sang, he drank, he did everything… only for cinema,” Randhir Kapoor, who has penned the book’s foreword, added.

Growing up there were so many stories of Raj Kapoor, usually they were stories of glory, Ranbir Kapoor said.

“Rahul uncle has painted him real. When you assist someone at work, you get to know who that person was. Rahul uncle has put his madness in perspective very nicely.” The actor, who is in the capital to launch the motion poster of his upcoming film “Brahmastra” on Wednesday, also remembered his father, actor Rishi Kapoor as a “strict but passionate” man.

“He was passionate about everything — his wife, his family, his food, his alcohol, his movies. He used to love playing bridge on the computer while listening to old Hindi songs on the radio. Apart from all the cinema values, what me and my sister are really proud of are the moral values that he instilled in us. He was truly a great father, we miss him dearly.” Randhir Kapoor said when “Mera Naam Joker”, which his father directed, produced and featured in, bombed at the box office and opened to bad reviews, the late director was so disheartened that he didn’t want to celebrate his birthday.

But today the film, about a clown who must make his audience laugh at the cost of his own sorrows, is the “biggest profit point in my organisation”, he said.

“I make the most money out of ‘Mera Naam Joker’, the first choice of every distributor of mine is this film,” he added.

Initially criticised for its extremely long running-time of 248 minutes, “Mera Naam Joker” went on became a cult classic and is regarded as one of Raj Kapoor’s best films and among the best Bollywood films of the 20th century.

“Maybe the film came a bit too soon. People say that the picture was too long. It was but a minute or two longer than ‘Sangam’. ‘Sangam’ could be a huge success, I don’t think length was the problem. People didn’t understand the film then.” As the commercial aspect in films tends to supersede creativity today, Randhir Kapoor said “the Raj Kapoor era of films is over”.

“Today, people prefer to work in a film which completes in 13 days rather than 300 days. Like Rahul said that Raj Kapoor started shooting for ‘Bobby’ at 6.30 in the morning and at 6.45 am, the day was over. He didn’t calculate money. I remember he got the rooftops of Gulmarg painted during the shooting of ‘Bobby’ because they were not looking nice. That was personal cinema.” Ranbir Kapoor partially agreed to his uncle’s remarks, saying he used to hear stories that Raj Kapoor’s house was mortgaged and his grandmother Krishna Kapoor’s jewellery was sold to complete a film.

Defending the new-age directors, he added, “Not saying that my generation of filmmakers are only running behind the commercial aspect… When I assisted Mr (Sanjay Leela) Bhansali (on ‘Black’), he used to really treat me as an assistant director. I used to be kneeling down for hours, he used to hit us, he used to abuse us… that only hardens you and prepares you for the world.” PTI RDS BK BK BK