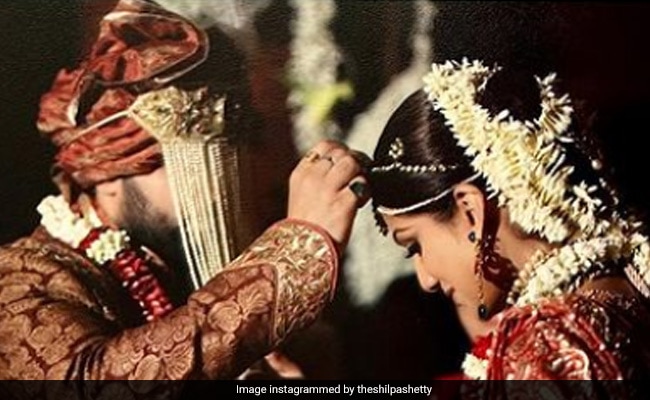 Happy anniversary, Shilpa Shetty and Raj Kundra. The couple, who got married on November 22 in 2009, celebrate their 12th wedding anniversary today. On their special day, Shilpa Shetty shared some priceless pictures from their wedding and wrote about “promises, commitment” and “faith” in a note dedicated to Raj Kundra. “This moment and day 12 years ago, we made and continue to fulfil a promise; of sharing the good times & bearing the hard times, of trusting in love & God to show us the way… side by side, day by day. 12 years and not counting… Happy Anniversary, Cookie!” wrote the actress and added: “Here’s to many more rainbows, laughter, milestones, and our prized possessions… our children.”

Shilpa Shetty also expressed her gratitude towards those who supported her and her husband through their hard times. Raj Kundra was arrested by the Mumbai Police in July in a case involving production and distribution of pornographic clips on mobile apps. He was granted bail on a surety of Rs 50,000 by a magistrate court on September 20. In her caption, Shilpa Shetty added: “Heartfelt gratitude to all our well-wishers, who have been with us through thick and thin. #12Years #promises #commitment #marriage #faith #family #gratitude #blessed.”

Shilpa Shetty and Raj Kundra have been under media scrutiny since the businessman was arrested in a pornography case earlier this year. He walked out from the Arthur Road jail on September 20, after getting bail by a Mumbai Court.

Earlier this month, a cheating case was filed against the couple by a Mumbai-based businessman lodged for allegedly duping him of Rs 1.51 crore. However, Shilpa Shetty issued a statement denying any sort of involvement in the case. An excerpt from her statement read: “I have worked very hard over the last 28 years and it pains me to see that my name and reputation is getting damaged and dragged so loosely to get eyeballs. My rights as a law-abiding proud citizen in India should be protected.” Read the full statement here.

Shilpa Shetty and Raj Kundra are parents to a son named Viaan and little daughter Samisha, who they welcomed via surrogacy last year.