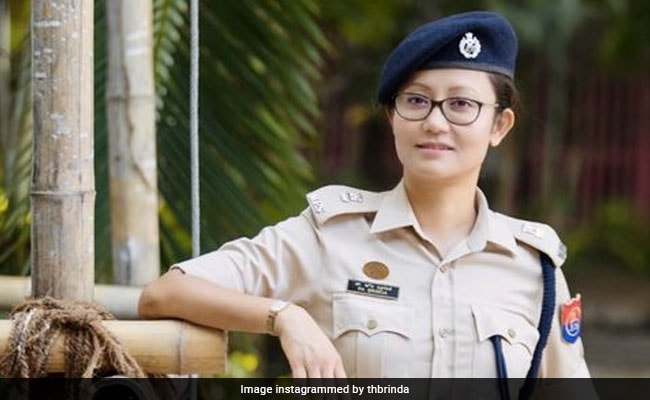 A lady ‘super cop’ in Manipur who took on the drug mafia in the state is now contesting against the BJP in the upcoming assembly elections. Home Minister Amit Shah was seen doing door to door campaign against her in the Yaiskul Assembly seat in Imphal East.

Brinda Thounaojam is being seen as a candidate with a difference. Her father-in-law headed an armed movement against the state but she served the Manipur police as an excellent officer on a crusade against drugs. She left the police force after a fallout with Chief Minister N Biren Singh, who she accused of helping a drug lord. Now, she is contesting against BJP’s incumbent MLA and current Manipur law minister Thokchom Satyabrata Singh on a JD(U) ticket.

43-year-old Brinda Thounaojam has a fan following among the youth. A decorated officer, she became famous after a high-profile case where she seized drugs worth over Rs 27 crore in 2018. She led the operation of the anti-narcotics unit of the Manipur police where she was the deputy chief.

The Biren Singh government conferred a gallantry award on her the same year.

However, Ms Thounaojam returned the award in 2020 after she fell out with Chief Minister. She accused him of helping in the acquittal of the main accused in the same drugs case.

Her popularity is being seen as the reason that the Union Home Minister had to campaign for the BJP candidate. However, she seems unfazed.

“I take it as a compliment that the BJP’s sitting Minister needed the Union Home Minister to campaign against me. My fight is against the drug menace and corruption. As a cop, I was not able to do much for the people. I want to create an impact in the state assembly,” she said.

The JD(U) candidate is not new to adversity. In 2016, she resigned from service citing discrimination and suspicion for being the daughter-in-law of RK Meghen – the leader of a banned militant group.

Her supporters see great promise in her.

“Eche (sister) embodies the qualities of a youth leader. She knows what the youth wants and we hope she will deliver,” said Sukumar, a young supporter.

Another supporter, Gangland Devrani Devi, said that Ms Thounaojam “has always fought corruption” which is a big issue in the state.

In 2017, Irom Sharmila Chanu, the “Iron lady of Manipur” who ended an iconic 16-year fast to debut in politics as a mark of protest against the Armed Forces Special Powers Act (AFSPA) also had massive support from the youth but it did not translate into votes.

Her supporters are hoping Ms Thounaojam can avoid that fate.

Voting in Manipur is scheduled for February 28 and March 5, and the counting will take place on March 10.