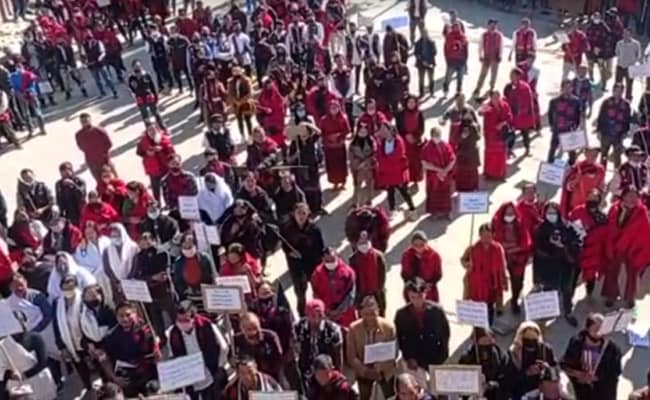 The protests in Nagaland against the Armed forces over the killing of 14 civilians in a botched operation are now spreading across the state. Massive protest rallies seeking justice for those killed are taking place in the entire eastern part of the state.

A dawn to dusk bandh has also been called in Mon district where the botched Army operation took place. Government and private offices and business establishments remained closed during the shutdown and vehicular traffic was paralysed as members of the Eastern Nagaland Peoples’ Organisation (ENPO), the top tribal body, staged demonstrations in Tuensang, Longleng, Kiphire and Noklak districts, and the Konyak Union, the organisation representing Konyak Naga tribe, to which the civilians killed in the botched Army op belonged, held protest rallies in the district.

Both the organisations have declared “non-cooperation” with the security forces until their demands are fulfilled and justice is delivered to the victims of the civilian killings.

Fourteen civilians in Mon district were killed on December 4 and 5 in three consecutive episodes of firing by security forces, the first of which has been claimed to be a case of mistaken identity.

The Army has expressed deep regret for the “unfortunate loss of lives” and said the matter would be investigated at the “highest level”. Today the Army said the violence began after a member of the elite 21 Para Special Forces believed there was a hunting rifle in the truck carrying the civilians.

The incident has led to mounting calls for the repeal of the hugely controversial AFSPA in the state.

“Every year the Centre extends AFSPA in Nagaland saying it is a ‘disturbed area’… but all the armed groups are in ceasefire and part of peace talks. So why extend it?” Nagaland Chief Minister Neiphiu Rio had said.