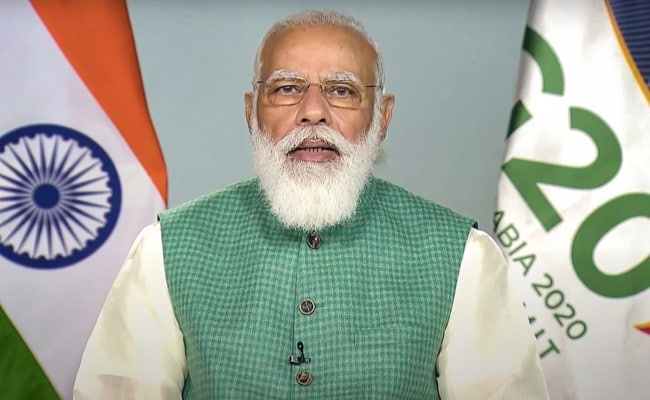 PM Modi asserted that India is moving ahead with ambitious goals on climate mitigation. (File)

Prime Minister Narendra Modi on Sunday asserted that India cannot ignore the neglect of climate finance, and called on developed nations to set a target of providing at least one per cent of their GDP for financing green projects in the developing world.

Addressing the G20 Summit Session on ‘Climate Change and Environment’, PM Modi said that by forgetting climate justice, “we are not only doing injustice to the developing countries, but we are betraying entire humanity”.

As a vocal voice of the developing countries, India cannot ignore the neglect of climate finance by the developed nations, he asserted.

Without concrete progress on climate finance, pressuring the developing countries for climate action is “not justice”, PM Modi said.

He suggested that the developed countries set a target of providing at least one per cent of their Gross Domestic Product (GDP) to finance green projects in developing countries.

India will also make its full contributions in all these efforts, he added.

PM Modi also asserted that India is moving ahead with ambitious goals on this issue of climate mitigation.

“When we announced our goals in Paris, many asked whether India would be able to do something like (creating) 175 GW of renewable energy. But India is not only rapidly achieving these goals but is also busy setting higher targets,” the prime minister said.

Going beyond its Paris commitments, India has set a target of 26 million hectares of wasteland rehabilitation and Indian Railways, the world’s largest passenger carrier serving an average of 8 billion passengers every year, has set a ‘Net Zero by 2030’ target, he said.

By increasing the number of Asian lions, tigers, rhinos, and dolphins, India has proved that our commitment to protecting the environment is not limited to the energy debate, PM Modi said.

India has never retreated from the responsibility of mitigation, nor will it ever do so, he asserted.

Due to the efforts made in the past few years, today India is one of the top five countries in the world in terms of renewable energy capacity, he highlighted and noted that the world also recognises this success of India.

In his address at another session on sustainable development, PM Modi said that due to the coronavirus pandemic, the pace of achievement of the Sustainable Development Goals in the world has slowed down.

The pandemic has further widened the economic gap between different countries, between social groups, between women and men, he said.

“It is essential that in post-COVID recovery, our major priority remains on the SDGs. LDCs, especially Africa and small island countries, will require special support. In this context, Italy has organised the G20 Development Ministers’ meeting for the first time. I welcome it,” PM Modi said.

He said India has made many of its digital solutions open source and available to all of humanity.

“We would like to work with our G20 partners to take India’s experience to other developing countries,” he asserted.

Noting that this is the first year of ‘Decade of Action’, PM Modi said, all have a shared responsibility that the benefits of global recovery reach all countries, and added that the role of G20 will be very important in this.