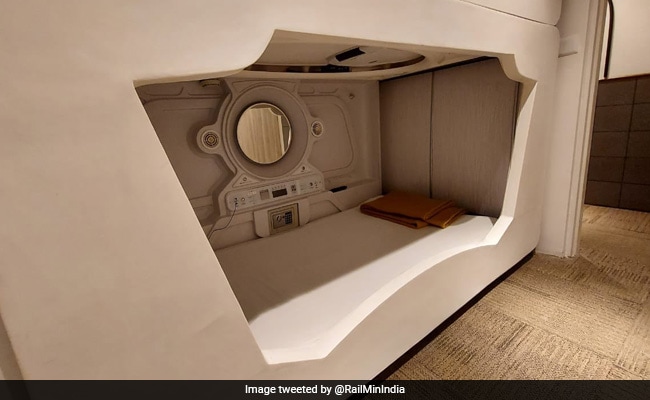 The Ministry of Railways has shared a glimpse of the new pod rooms that were inaugurated at Mumbai Central railway station today. The pod concept retiring rooms will provide world-class comfort to travellers at affordable rates.

A pod hotel, also known as a capsule hotel, has a number of small rooms or “pods” that contain a single bed each. These hotels were first started in Japan to provide cost-friendly yet comfortable accommodation to travellers, and have seen an increase in popularity in India of late. Urbanpod was one of the first boutique pod hotels to open in India.

Photos shared by the Ministry of Railways show that the Urbanpod hotel at Mumbai Central station in Maharashtra features a row of pod rooms which travellers can book for short stays.

The swanky new pod rooms at Mumbai Central have been done up in muted shades of beige, brown and white. The pods come with a single bed, a mirror and a personal safe, among other amenities.

“Travelling by train on a short business trip or taking a group of students on a tour, POD rooms at Mumbai Central station are here to make your journey comfortable and easy,” the Ministry of Railways wrote while sharing photos on Twitter.

The state-of-the-art pod rooms were inaugurated by Minister of State for Railways Raosaheb Patil Danve this morning.

Passengers can avail all modern facilities at comparatively cheaper rates at these Pod concept rooms.@RailMinIndiapic.twitter.com/c9ui1t98E1

Photos of the capsule-like rooms have created a buzz on social media.

“Wow. This is awesome,” wrote one Twitter user. “Unbelievable,” another said.

Many said they hoped the pod rooms would be maintained well.

This looks super cool on photos. However, I am not sure how hyegenic option this would be at this time, considering normal Indian railway commuters are known for misusing priviledges (e. g. As seen in inaugural run of Tejas).

well this is how Ahmedabad retiring room looks like… i hope this ones are well maintained @RailwaySeva@WesternRly@rajtoday
https://t.co/73Yyzg0Fev

Located on the first floor of Mumbai Central, the pod hotel has 48 capsule-like rooms. These include classic pods, private pods and “ladies-only” pods and pods for the differently-abled.

The air-conditioned pods will also have free Wi-Fi, mobile charging points and a reading light.