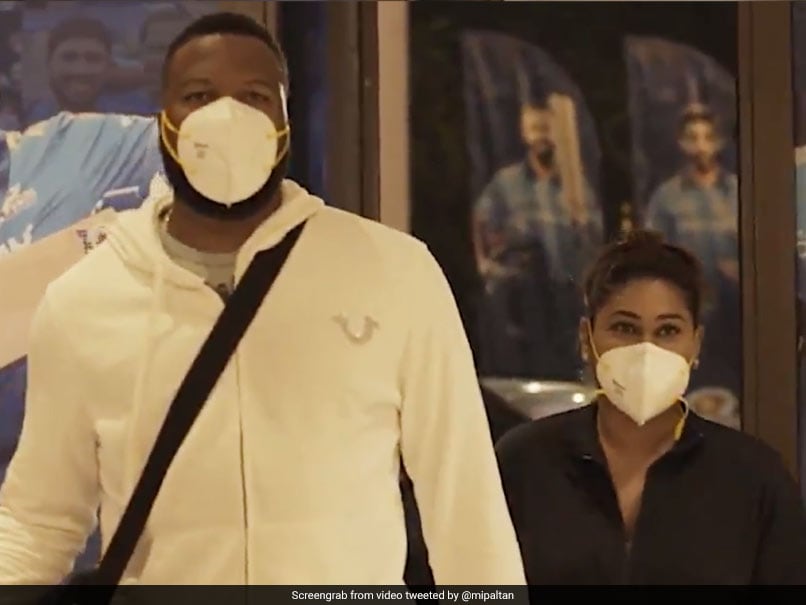 Kieron Pollard arrived in the UAE with his wife on Friday ahead of IPL 2021 resumption.© Twitter

Mumbai Indians will be looking to defend their IPL title when the tournament resumes in the United Arab Emirates (UAE) on September 19. Kieron Pollard, a key member of the record IPL champions, is looking forward to IPL 2021 resuming and is hoping to repeat their title-winning performances from 2020 this year. The West Indian all-rounder and his wife reached the UAE on Friday. Pollard said the team has “good memories” from their campaign last year in the UAE. Mumbai Indians defeated Delhi Capitals by five wickets in the IPL 2020 final to win an unprecedented fifth IPL crown.

Mumbai Indians were in fourth spot in the IPL points table when the tournament was postponed in May after a Covid outbreak in the IPL bio-bubble across teams.

“Yeah. Looking forward. Going downstairs in that team room and try to bond again and get started. Looking forward to finishing the IPL and hopefully we can repeat what we did here last year. Good memories for us,” Pollard said in a video posted by Mumbai Indians on their official social media handles.

MI have made a habit of starting the tournament slowly and things weren’t much different this year as well. They began their IPL 2021 campaign with a defeat in the opening match to Virat Kohli-led Royal Challengers Bangalore.

The defending champs bounced back with consecutive wins but lost two on the trot to Delhi Capitals and Punjab Kings to register just two wins from five games.

Before the tournament was halted, Mumbai Indians managed two more wins to make it 8 points from seven games in IPL 2021.

Mumbai resume IPL 2021 with a tricky contest against arch rivals and second-placed Chennai Super Kings on September 19 in Dubai.